Sir George Sitwell, Eccentric Baronet Content from the guide to life, the universe and everything 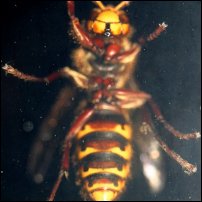 Sir George Reresby Sitwell (1862 - 1943), 4th Baronet of Renishaw, was an unusual man. It’s tempting to dismiss the designer of a small pistol for shooting wasps as either a madman or a joker. The ever-serious Sir George was neither. He had a lot of time on his hands, that’s all.

Sir George enjoyed a large and reliable income from his estates, covering some 50 square miles of the northern tip of the underappreciated county of Derbyshire. The achievements of his 81 years include a fine restoration and extension of the 17th Century Renishaw Hall, and the establishment of its beautiful gardens. He also produced one book of note, and fathered three remarkable children. For the rest of the time, he tried to find something to do, and he recorded his efforts meticulously.

George was born in 1862. His father, the 3rd Baronet, was called Sitwell Sitwell. With a naming habit like that, eccentricity was undoubtedly a family trait, but the behaviour of ancestors was about to seem almost ordinary by comparison. The first public pronouncement of the young heir was ‘I am Sir George Sitwell, baronet. I am four years old and the youngest baronet in England.’ It astonished fellow passengers on a train, and was dutifully noted by a nurse.

Sir George took several years to get into his stride. His next conspicuous foray into society involved the celebrated medium, Ms Florence Cook. During a séance in 1880, our hero noticed what appeared to be corset stays beneath the ethereal veil of the manifest spirit of someone called Marie, so he naturally grabbed hold of her and pinned her down till the lights came on. Sir George was not surprised to discover that he was holding onto Florence, clad only in her underwear, but everyone else present was somewhat startled.

In 1885, Sir George entered parliament as the Tory member for Scarborough. He represented the constituency until 1895, and asked a total of eight questions during his political career. Hansard reports the last of these, posed on 29 June, 1893, as follows: ‘I beg to ask the Under Secretary of State for Foreign Affairs whether the Archbishops of Marash and Zeitoun and the Bishop of Moush are still in prison after a mock trial; and whether any steps have been taken to obtain their release?’

Sir George married in 1886. Ida Emily Augusta Denison was the daughter of the 2nd Baron Londesborough, and had a reputation for being somewhat profligate. The union was grounded in mutual indifference from an early stage, but produced offspring at five year intervals nonetheless. Edith appeared in 1887, Osbert in 1892 and Sacheverell in 1897. All three became gifted writers, and each did their bit to immortalise their significantly less gifted father. Sir John Singer Sargent also painted a family group portrait in 1900. This was about the time that Sir George’s propensity for the bizarre found another gear.

Writing was already a large part of Sir George’s routine. He was prolific, but rubbish. As early as 1889, he completed The Barons of Pulford in the Eleventh and Twelfth Centuries and their Descendants but for some reason failed to find a publisher. He bought a press and printed it himself. He would eventually fill seven rooms at Renishaw Hall with his drafts and diaries, and never threw a word of them away. Had he lived in another time, some of the titles suggest that he would have made a great h2g2 Researcher: Wool-Gathering in Medieval Times and Since, Lepers’ Squints, Domestic Manners in Sheffield in the Year 1250, Acorns as an Article of Medieval Diet, The History of the Fork, The History of the Cold and The Errors of Modern Parents. His one published work concerned the only thing he ever did convincingly well. On the Making of Gardens appeared in 1909.

Sir George eschewed fiction, however, believing that novel writing destroyed the health of its practitioners. He was something of a hypochondriac himself, carrying a copious collection of medicines whenever he travelled. All of the bottles were systematically mislabelled, to prevent other people from taking them.

Perhaps spurred by his literary success, 1909 was the year in which Sir George purchased a very large Italian castle, the Castello di Montegufoni in Tuscany, and began to sojourn there for long periods apart from his family. During one of these, in 1913, Lady Ida was sent to prison for three months for non-payment of debts, but Sir George did not find it necessary to come home, though he did send letters to the children. In one of these he revealed that the locals were perplexed by his habit of frequenting rustic inns in full evening dress.

Back at Renishaw, the earthworks became steadily more epic. Whole lawns were raised by three feet one year, and lowered again the next. Full-grown oaks were relocated, most of them miraculously surviving the ordeal. An artifical lake was excavated, judged to be in the wrong place, filled in again and established somewhere else. Sir George was fond of consulting his friend Edwin Lutyens about these schemes, and the celebrated architect went out of his way to avoid him.

Farming became something of a hobby for Sir George, and provided scope for eccentricity just like everything else. He attempted to decorate cows, by stencilling them with the Chinese Willow pattern. Sacheverell was almost sent down from Eton when his father demanded to pay his fees in produce.

As well as the Baronetcy, Sir George also enjoyed the scarcely less aristocratic title of Lord of the Manor of Eckington. This village, two miles along the road to Sheffield, was the original source of the Sitwell family’s wealth, through its ironworks and a historic position as the world’s largest supplier of nails. One of Sir George’s visits was observed by a young villager who would later turn out to be Mick Jagger’s dad, but the Lord of the Manor disappointingly failed to do anything ridiculous on that particular occasion.

The wasp-gun was not the only pointless invention. A musical toothbrush was another, but the most famous one left its inventor so sure of its merit that he made a personal visit to Sir Gordon Selfridge to promote it. Though he didn’t have an appointment, the silk hat and frock coat impressed the flunkeys sufficiently to secure an audience, which began with a typical pronouncement : ‘I am Sir George Sitwell, and I have brought my egg with me’. The Sitwell Egg was egg-free, in fact. It was a nutritious and convenient travel food in the likeness of an egg, consisting of a ‘yolk’ of smoked meat, a ‘white’ of rice and, for some inexplicable reason, a shell made of synthetic lime. Needless to say, Selfridges never did stock it.

Sir George’s own writings suffice to define him, but in case there was any doubt about his supreme detachment from the world view of the rest of humanity, the kids threw in a few anecdotes of their own. Osbert in particular threw in a couple of books full. Apparently Osbert’s pocket money was rather stingy, a result of the fact that his father discovered a record of the allowance granted by an ancestor to his heir. Unfortunately, the payments were made at the time of the Black Death. Osbert also recounted a story to his friend Aldous Huxley. It took place during the Great War, and concerned a strange ritual of saving peach-stones and sending them by post to His Majesty’s Government, in the apparent conviction that they could somehow be fashioned into gas-masks. Huxley incorporated the idea into his book Chrome Yellow.

Edith actually wrote a collective biography of The English Eccentrics (1933) but seems to have been more reluctant to reveal her father. She does disclose a few choice quotes, though. These include the faintly disturbing ‘There’s nothing a young man likes so much as a girl who’s good at the parallel bars’ and the wording of the plaque he set in the hallway at Renishaw to warn visitors of what they were letting themselves in for: ‘I must ask anyone entering the house never to contradict me in any way, as it interferes with the functioning of the gastric juices and prevents my sleeping at night.’

When Sacheverell Sitwell became the 6th Baronet, succeeding his brother Osbert who was the 5th, he added to the store of quotes. Sir George’s landscaping urges weren’t confined to his own homes, it seems. When visiting his younger son’s abode in 1924, he declared ‘I don’t propose to do much here. Just a sheet of water and a line of statues.’

Another fine source of Sir George anecdotes was an eccentric himself. It’s unsurprising that Sir George chose a colourful character to be his valet, and Henry Moat (1871 - 1940) was certainly that. Edith described him as ‘an enormous purple benevolent hippopotamus with a voice like some foghorn endowed with splendour’.

Moat’s duties included accompanying Sir George on his many visits to the British Museum. While Sir George indulged in all manner of obscure research, Moat carried an inflatable cushion at all times. Moat also had an unusual pet, a seal from his native Whitby. It is Moat who tells us that Sir George published a pamphlet explaining the errors in Einstein’s General Theory of Relativity, and that his master believed that knife-handles would one day be made from a material derived from condensed milk.

Twenty years after Sir George finally left us (in 1943 at Locarno, Italy, vehemently protesting that he had been driven to tax exile), another much-loved character was born nearby at Intake. It was then the northernmost point in Derbyshire, though nowadays it’s part of Sheffield. Jarvis Cocker is louche and self-mocking in a way that Sir George Sitwell most definitely never was, but the local capacity for eccentricity is evidently still alive and well.