Smiths Salt 'n' Shake Crisps Content from the guide to life, the universe and everything 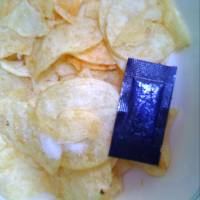 A potato crisp1 snack of bygone times, and still thankfully available today, the Salt 'n' Shake Crisp was originally marketed by Smiths until the company merged with Walkers Snacks Ltd in 1979. Marketed in a white packet emblazoned with a blue shield, the crisps themselves are plain, but surprisingly tasty.

The vital gimmick of the brand is a small blue packet that can be found inside hiding amidst the sundry potato chips. Slightly smaller than an average adult male's thumb, the deep blue packet contains a small quantity of salt. If the user wishes to consume lightly salted crisps instead of plain, the process is simple. There are, for those inclined to investigate, various techniques to 'salting' the crisps:

There are instances where the manufacturing process fails to couple the blue packet with the crisps, leading to occasions where salting is impossible without a visit to a local restaurant or store. It is at this point that consumers should be thankful that the unsalted crisps are, in themselves, quite tasty.

It has been known, throughout the period of this product's availability, for some individuals to consume the salt content of the blue bag without the crisps. Or, with several packets available, to oversalt. Just as the manufacturing process sometimes misses the blue bag, other packets of crisps benefit from more than one, making oversalting or direct salt eating possible with minimum effort and expense.

The nature of marketing new products is that regional testing can lead to certain items never reaching the greater mass of the public. Evidence seems to indicate that there may have been experimentation with a 'Flavour 'n' Shake' product in the 1980s; but the test release failed to show positive responses and the product was dropped. It seems likely that because the manufacturer was based in Leicestershire, UK, the experimental product never saw the light of day outside of the Midlands region.

The experiment took the simple blue bag of salt and replaced it with a flavouring that could be added in the same fashion described above. For those with a taste for adventure this meant that collecting different bags of flavouring would allow the creation of some truly tongue-pounding combinations that could be enjoyed with or without the crisps supplied.

1Chips in the US.