Victoria, Australia Content from the guide to life, the universe and everything 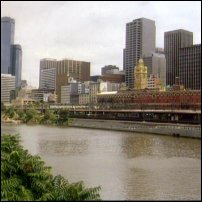 Victoria is in the south east of mainland Australia, a funny looking little state about the size of England, shaped by the fact its shorelines run along Bass Strait (the bit of sea between Victoria and Tasmania) and the Murray River, which acts as the border between New South Wales and South Australia. Victoria was settled by Europeans mostly during the 1800s, and especially during the Australian Gold Rush, when people from all over the world flocked to the state to find gold. Hence, many Victorian towns still rely on heritage themes, and links with the Gold Rush, for their tourism dollar.

The capital of Victoria is Melbourne, arguably the best city in Australia (anyone from Sydney will tell you otherwise). Melbourne, like most of the other capital cities in Oz, is a port. And while there are beaches to play on, because of its southerly position (close to Antarctica), it's more for surfers than beach-bums, as it can get bloody cold. Melbourne is a city renowned for having four seasons in one day, a great music scene, and being the home of the TV soap opera, Neighbours. As with any Aussie city, some of the hot-spots are its pubs and clubs - the 'Espy' in St Kilda being one worth popping into.

Victoria is home to a wide variety of attractions, and the 'Mexicans' (the nickname given to Victorians by those from the state of New South Wales, seeing as those in Victoria are south of the border) are very proud of these. There's the obligatory tourist haunts (the beaches, the Melbourne Cricket Ground, and any place that offers the chance to see any number of weird and wonderful Aussie animals), and then there's the snowfields in the Alpine Region, the Great Ocean Road and the 12 Apostles, anything to do with Ned Kelly, the Melbourne Cup, and - the wineries. With over 350 to choose from, some outstanding Australian wines come from Victoria. In the Rutherglen region alone you can choose from Brown Brothers, Morris' or All Saints to name but a few. Then, if you don't like wine, Carlton & United Beverages offer up Victoria Bitter, the best lager this side of Whoop-Whoop.

Victoria has perhaps some of the choicest Chinese restaurants outside of Beijing, and, quite possibly, the finest Greek restaurants outside of Athens - the Gold Rush attracted many people to the state, and of course once they settled they had to eat. In fact, almost any decent sized town or city in Victoria boasts a fair to excellent Chinese restaurant, or at least take-away, and more often or not a Greek one too1. On the subject of take-away food, Victoria is home to the humble Four & Twenty Pie (a must-have at the footy), and the saveloy (a strange battered sausage meal - but we won't go into that here). In fact, because of the multicultural emphasis within Victoria, and much of Australia, you can get anything from sushi through to schnitzel - and all at a very high standard. If it's one thing Victorians know, it's how to be epicurean.

And of course, any visit to Victoria should include a trip to the MCG to see a Test Match, or game of Aussie Rules.

1And if the token Greek family doesn't have a restaurant, they'll most certainly be running either a grocery or milk bar.