Russian Checkers Content from the guide to life, the universe and everything 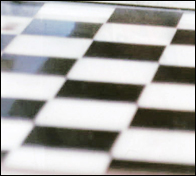 Also known as Shashki, Russian checkers is a game for two people that's almost but not entirely like draughts. The game is played on the dark squares of an eight by eight chess board. The object of the game is to prevent your opponent from moving on his or her turn; this is accomplished by either blocking all your opponent's pieces or by taking all of them out. If neither can be done, then the game is a draw. The board must be positioned so that the bottom left hand corner facing each player is a dark square. Russian checkers has a fun twist compared to draughts and is sure to catch everybody out.

Both players start off with twelve pieces each. The pieces are aligned on the dark squares of the three rows nearest each player, leaving the middle two rows empty. There are two types of piece in the game, 'men' and 'kings'. Men are represented by a single checker, while kings are represented by two. There are also two forms of movement: 'moving', which entails sliding the piece along a diagonal, and 'jumping', in which a piece hops diagonally over an opposing piece and comes to rest in the empty square directly beyond it. More than one piece can be jumped in a row, even if this involves a change of direction. Note that a player cannot jump one of their own pieces, and may not jump over the same piece twice during a series of jumps. Also, pieces captured by jumping are not removed from the board until the turn has ended.

As in draughts, a player must always take an opposing piece if they have the opportunity to do so, and must always continue to jump if possible. In draughts, a 'huff' can be used to remove an opponents piece if they fail to make a jump when one is possible. However, such a rule is not used in Russian checkers – instead, any turn where a player fails to take advantage of an opportunity to take an opposing piece must be undone and then repeated in such a way that an opposing piece is taken, preferably using the same piece as before. Note that where more than one option to jump is present, there is no obligation to choose the path that allows the most opposing pieces to be taken.

When there comes a time where one player has one king, the other has three kings and no other checkers remain, then a count begins. If the player with three kings doesn't take out the opponent after they have made fifteen moves then it is counted as a draw. For victory to be possible, it is usually necessary for the player with three kings to control the bottom left to top right diagonal, else the single-piece player may hide in one of the corners.

There aren't any particular strategies in Russian checkers like there would be in chess. However, it is a good idea to plan the next three moves. An example would be, sacrifice one piece by forcing your opponent to take it out, and then you can take out two of their pieces because you have just manipulated them into doing so.