The Millennium Stadium Jinx Content from the guide to life, the universe and everything 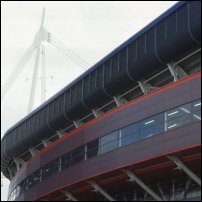 When Stoke City FC took to the field for the Football League Division 2 Play Off Final against Brentford on 12 May, 2002, they were the overwhelming underdogs. It wasn't that they weren't as skilful as their opponents, nor had they trained any less. In fact, their record against Brentford was OK, too. The problem was that they had made their way on to the pitch from the Southern Dressing Room - and this was jinxed. Ever since Cardiff's Millennium Stadium had been built, every finalist who had prepared in the Southern Dressing Room had lost - all 11 of them.

And it wasn't just football - the stadium had also hosted three rugby finals, and in each of these, the jinx had also struck. Stoke were actually up against a 14-game losing streak.

Perversely, the construction of the stadium was one of the very few Millennium building projects which wasn't jinxed. Across the UK, billions of pounds, much of it raised through the new National Lottery, was being invested in a sad series of white elephants. These were invariably completed late and overran their budgeted costs, and many were subsequently shunned by paying visitors, leading to premature closure.

The Millennium Stadium was different; it had a purpose and a deadline. Conceived in 1994 as a redevelopment for the ageing and low-capacity Cardiff Arms Park, it had a £114 million budget, over half of which was raised from commercial partners. One of the striking design features was a retractable stadium roof - the first in the UK.

The deadline for completion was the 1999 Rugby World Cup tournament, and, although the stadium was then only three-quarters complete, this was able to take place as planned.

It was a different story at the other end of the M4 motorway. London's crumbling Wembley stadium was also due for replacement, but the rebuilding project was long delayed and astronomically expensive. Cardiff stepped in and hosted the English matches in the interim.

The run of jinxed finals started, of course, with the 1999 Rugby World Cup Final1, in which Australia trounced France 35-12. The French may not have considered themselves jinxed - they were well-beaten, and, as you might expect, nobody would identify the jinx until it had struck a number of times.

Next up was another rugby final - the Principality Cup2 on 20 May, 2000, in which Llanelli defeated Swansea by 22 points to 12.

The first football victims were Birmingham City on 25 February, 2001. Now, the Blues were certainly unlucky; the Nationwide League Division One3 side put up a tremendous fight in the League Cup4 Final against their illustrious Premiership opponents, Liverpool. The match had finished a one-all draw, but Birmingham lost 5-4 in a sudden-death penalty shoot-out: goalkeeper Sander Westerveld decisively saving the twelfth spot-kick, from Andrew Johnson.

On the other hand, the next victims, Brentford, could not have felt unlucky in their Millennium Stadium final, losing 1-2 to Port Vale in the LDV Vans Trophy5 Final two months later. They were outplayed for much of the match.

Next came the FA Cup Final in May - the first to be played outside Wembley since 1922. Liverpool again claimed the silverware, defeating Arsenal 2-1 with two late Michael Owen goals, after Arsenal had dominated the match.

And so the jinx continued, unbeknown to its victims. The following day saw Newport beat Neath 13-8 to win the 2001 rugby Principality Cup. Later that month came a series of three football divisional play-off finals. The winners would gain promotion to the next division up, and, in each case, the tenants of the Southern Dressing Room would go home empty-handed. Blackpool beat Leyton Orient 4-2, Walsall beat Reading 3-2 and Bolton beat Preston 3-1 in these matches.

Following the summer break came the 2001 FA Charity Shield - the traditional season opener between the Premiership champions and the FA Cup Winners. Champions Manchester United drew the dressing room short straw this time, and were subsequently defeated by Liverpool 2-1.

And then in 2002 it started all over again, as Northern Dressing Room occupants Blackburn Rovers beat Tottenham 2-1 in the League Cup Final on 24 February. People started to take notice.

When Cambridge United reached the next Millennium Stadium final, the 2002 LDV Vans Trophy Final against Blackpool, they drew the ill-fated dressing room. The stadium management decided to take action. They called in a feng shui expert from the mystic East - well, mystic East Midlands, actually: Paul Darby from Nottinghamshire. Feng shui expert to the stars, Darby's record of success in this field included doctoring the UK Big Brother house to ensure that conflict occurred in every room6.

Darby no doubt consulted the ancient texts, as he studied the positioning of objects in the Southern Dressing Room. Fortunately, he found there was a solution to all this negative qi (chi), and administered the following remedy:

But was this just random chance, now that the jinx had been tackled? The following week would be crucial: it was the FA Cup Final, Arsenal versus Chelsea, and this time Chelsea had drawn the short straw.

Oddly, Darby was a lifelong Arsenal fan; in fact he was somewhat mortified to discover that he had been working to improve Chelsea's chances of victory. It wasn't that he wanted any particular dressing room to have an advantage, of course; he just wanted to nullify any negative forces, so that each team was on a level playing field, so to speak.

Chelsea were bullish about the situation. They didn't care which changing room they had, because they were going to wear their 'lucky white socks'. Their two previous FA Cup Final victories, in 1997 and 2000, had been won not by the skills of their players, nor by employing superior tactics; they had won because of the colour of their hosiery.

But in the end it was Arsenal who triumphed, 2-0 over an injury-hit Chelsea. The jinx was plainly still alive and stronger than ever. Then, in the Division Three play-off final which followed two days later, Cheltenham Town from the Northern room beat Rushden and Diamonds from the Southern one.

Darby wasn't defeated. He realised this would need a more robust remedy. He discovered that the Southern Dressing Room was next to the Media Room. This in feng shui terms was, to mix a metaphor, pretty bad karma: all those TV cables were clearly draining all the life force straight through the dressing room wall. He prescribed some artwork for it.

The stadium officials put the call out for a painter, and it was the Welshman Andrew Vicari who answered it. European Artist of the Year in 1995, Vicari came with a high reputation, and was reputedly one of the highest-earning painters in the world.

In two days he daubed Firewall, a seven-feet-wide mural on the offending wall. It was bold and brightly coloured, featuring a blazing sun, a galloping horse and a soaring phoenix. It was unveiled a couple of days before final number 15.

And so it was that Stoke City took to the pitch, fortified with all the positive energy from Vicari's painting. And, to cut a long story short, it worked! Having changed in the jinxed dressing room, they then won the match 2-0. Not only that, but they were extremely lucky in doing so. Their first goal was scored after a pass was deflected into the path of striker Deon Burton. Their second was a free kick which actually suffered two deflections, eventually being put into his own net by Brentford's Ben Burgess. The jinx wasn't broken, it was well and truly shattered.

Of course, there have been other examples of sportsmen and sports fans blaming the supernatural. Sometimes it appears to be the only way for them to explain these sequences of bad results.

When Southampton FC moved to their new stadium, St Mary's, in 2001, they just couldn't win at home. This was subsequently identified to be the work of some dead Saxons, upon whose ancient burial ground the stadium had been built. The curse was lifted by adopting the two-pronged attack of inviting a pagan witch to bless the ground on one hand, and hiring Gordon Strachan as team manager on the other.

Gypsies have also been known to curse stadiums. Middlesbrough's Ayresome Park was one such target in 1947, causing the home side to lose a FA Cup quarter final to Burnley. Oxford United's Manor Ground was another, the curse lasting until the club invited the local Anglican Bishop to perform an on-pitch exorcism. Birmingham City manager Barry Fry took matters into his own hands in another similar situation; he lifted the curse by urinating on each corner flag.

One of the most enduring jinx stories, however, is that of the US magazine Sports Illustrated. Any athlete who appears on its cover prior to a big event is far more likely to suffer defeat or tragedy. There isn't a 100% correlation, but of the thousands of issues published since 1954, a fairly high proportion (around 37% or so) have been associated with an unexpected run of bad luck in the following week. On two occasions the cover stars have even been killed in accidents, and on another a skier was paralysed from the neck down.

So, was the Millennium Stadium losing sequence really caused by a jinx?

Mathematically speaking, it's not completely out of the question that this was just an unusual result from a random sequence. If you toss a coin a number of times, then it may just land on the same side each time. For 14 tosses of the coin, the likelihood is pretty small, though. It's actually two raised to the power of 13, or 8,196 to one against. Even ill-fated England cricket captain Nasser Hussain couldn't quite match that: his longest losing sequence was 12 pre-match coin tosses.

Faced with the Millennium Stadium figures, a statistician would tell you that a jinx is indeed plausible, but their analysis would be based on independent trials, whereas the later teams in this sequence would have been aware of the jinx, which could have affected them psychologically. It's a tricky one to call.

We'll leave the final analysis to Stoke's victorious players, who unfurled a fan's banner during their post-match celebrations. It read: