Portal - the Video Game Content from the guide to life, the universe and everything 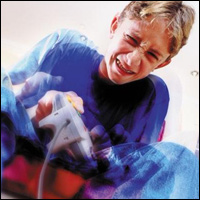 Released as part of the Half-Life 2 'Orange Box' for the Xbox 360 and PlayStation 3 in 2007, and for the PC in 2008, Portal is a puzzle-solving video game with a dark sense of humour. The player is placed inside a testing area at the aptly named Aperture Science Laboratories and must solve a series of tests by using 'portals' to achieve otherwise impossible objectives. In the process, they are constantly encouraged onwards by a psychotic but otherwise helpful computer. Produced by Valve, the game makes use of the same Source engine software as Half-Life 2, thereby providing the realistic physics required to make such an unusual game work.

The basic premise is this: there are two 'portals' - one blue, one orange. Enter the blue portal and you will come out through the orange one, and vice versa. Having completed the early puzzles, the player gains half of the Aperture Science handheld portal device, or 'portal gun', allowing them to control one of the two portals. They are eventually entrusted with the finished article: a gun that can fire both an orange and a blue portal onto any suitable surface1.

It does not sound all that fun, but with such a simple concept the potential for abuse of physics is tremendous. One trick is to put one portal above the other and fall through them for anything up to an infinite amount of time, in order to build up speed. The player can then carefully time a shot so that they re-deploy the top portal on a nearby wall, leading them to be flung out sideways at the same speed that they had been falling. This trick, known as 'flinging', is explained by the Aperture Science computer GLaDOS2 as 'speedy thing goes in, speedy thing comes out'.

Using a variety of such tricks, the player must move weighted storage cubes (in other words, blocks) onto buttons and direct flying balls of energy into receptacles, thereby opening doors and activating moving platforms. Having started with a simple block-goes-on-switch-and-door-opens test, the puzzles progressively become more difficult until the game begins to surpass the series of basic tasks that the player must complete. Each level is separated from the last by a material emancipation grid, or 'fizzler', that destroys any cubes the player might be trying to sneak through and shuts any portals they have opened. Later on, the fizzlers are also added to the puzzles to provide yet another layer of complexity.

The Cake is a Lie

In order to 'enhance the testing experience', the game includes the odd health-and-safety-approved death trap, along with the promise of cake once the player has completed all 19 tests3. At one point, the player is also provided with a partner to take across the level: the weighted companion cube, best described as a block which has a small pink heart painted on each surface and cannot talk. Having made it across an entire level with the cube, the player is then forced to incinerate it before continuing.

Meanwhile, GLaDOS continually shows a callous disregard for the player's life, with one testing area even being replaced with a live-fire course populated by cutesy androids loaded with real ammunition. As the threats become more real and the walls more blood-stained, the player is treated to dilapidated side areas where previous test subjects have scrawled stanzas lamenting being forced to destroy their weighted companion cubes, along with the repeated line 'the cake is a lie'. This fact seems to become increasingly evident once the 19th task is completed and GLaDOS attempts to incinerate the player, forcing them to use the portal gun to escape through the bowels of the testing centre. What happens next does not deserve spoiling here, although it should be mentioned that there is a rather good song at the end of the game.

Despite the game's short length, Portal's relatively original gameplay and unusual humour made it somewhat popular, and gained it quite a following. The phrase 'the cake is a lie' now appears on unofficial Portal T-shirts; the game has been subjected to a Weebl and Bob homage; and the weighted companion cube has been produced in a variety of forms, including cardboard cut-outs, furry dice and even homemade cakes.

Meanwhile, a multiplayer form of Portal has been considered, although apparently it would not be as fun as you might imagine. Most importantly, though, Valve has confirmed there will be a Portal 2.

1Any wall, floor or ceiling of good calibre will do nicely, although some surfaces are designed not to take portals, in order to make puzzles harder.2Genetic Lifeform and Disk Operating System.3Black forest gateau, to be specific.