Stoke Newington, London, UK Content from the guide to life, the universe and everything 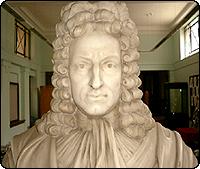 Stoke Newington is an 'up-and-coming', trendy bit of north London in the borough of Hackney. According to one Researcher, the place 'has long needed a good kick up the backside', having languished in a sort of elegant squalor ever since the likes of Daniel Defoe lived there over a century ago. Others would vehemently disagree, pointing out that Stoke Newington is losing its genuine sense of outlaw bohemia, giving way instead to a sanitised, soulless trendy wine bar-type vibe. Well, neither of these views are completely right. There's no denying that Stoke Newington is changing; but it still retains a lot of character, and it's most definitely worth a visit.

As previously mentioned, Daniel Defoe is arguably Stoke Newington's most famous son, being the author of Robinson Crusoe, A Journal of the Plague Year and the fruity tale of Moll Flanders. His tombstone is on display in Stoke Newington Library which is a very small, friendly little place, and as well as the tombstone of Daniel Defoe, one can usually find on display there the leather top hat that once belonged to Marc Bolan, lead singer with 1970's glam-rockers T-Rex. The hat was very much synonymous with the enigmatic Bolan who grew up in Stoke Newington as a child on Church Street.

Stoke Newington is a fabulous place for food. Church Street in Stoke Newington reads like Delia Smith's1 Atlas of the World; there's Italian, Thai, Malaysian, Chinese, Indian and French restaurants, and the ubiquitous Turkish kebab houses. In fact, Stoke Newington has one of Europe's largest Turkish2 communities and as a result the area is a sort of mecca for lovers of Turkish cuisine... especially kebabs.

Although there are many quality kebab houses to choose from, it is generally accepted that the best take away kebab house of them all is, funnily enough, called The Best Turkish Kebab on Stoke Newington High Street. The food is exceptionally fresh and carefully prepared. For example, a chicken kebab contains a fresh chicken breast brushed with butter and cooked on a smoky griddle until charred and juicy. The place is always full and always joining the queue are hungry members of Stoke Newington police force. 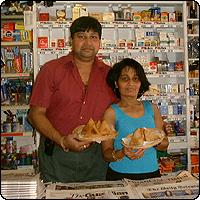 About halfway down Church Street, you'll find a small shop called Diamond Newsagents that marks itself out for extra special attention because it sells the freshest, most delicious samosas that you could possibly imagine. For those of you that don't know, a samosa is a triangular-shaped savoury snack containing a spicy meat or vegetable filling, wrapped in very crispy wafer-thin pastry. It's not unusual for British newsagents to do a little sideline in Indian samosas. It's also not unusual for them to taste rank; all cold and greasey. But not so the samosas at Diamond newsagents. The proprietor's wife, Mrs Patel, makes them fresh at the back of the premises, and such is the demand for her product, she'll make 100 of these crisp and delicious savoury parcels every day. More often than not, you'll find that when you've bought one, it's still lovely and warm. Either freshly filled with meat or vegetables, Mrs Patel's samosas are arguably the best in Britain.

Once a woman from Switzerland popped in to Diamond's to buy a newspaper. Whilst there, she bought a couple of samosas. So taken was she with their freshness and delicacy, she returned the next morning and placed an order for a hundred more. They were made by Mrs Patel that day, frozen, and then collected later by the mysterious passer-by. The Swiss woman in question was actually in charge of the catering for a grand wedding that was taking place back home, and she was on the look-out for 'special' food. That evening she flew back to Switzerland... along with a hundred perfect samosas. 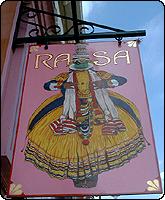 Undoubtedly, Stoke Newington is a very foody place, a fact that hasn't gone unnoticed by London's food critics - the Rasa, for instance, on Church Street seems to consistently win the award for being London's Best Vegetarian Indian Restaurant. indeed, the 2008 Time Out Restaurant Awards votes it 6th best restaurant in the whole of London. It's because the place makes awesome food. The proprietors hail from Kerala, a state in south west India, and the food is Keralan - colourful, fresh, light and fragrant. Every dish that's served in the Rasa seems to have a personality all of its own; there's not the slightest sense of homogeneity as no two dishes taste the same. Such is the place's reputation that even super-famous celebrity chef Jamie Oliver occasionally pops in to help out in the kitchen so that he can pick up a few tips with regard to the canny and judicious use of exotic spices. The Rasa' great; but it's not the only place to eat. Far from it. There are many, many more splendid eateries in Stoke Newington (and not just on Church Street) and they're all well worth checking out.

This plethora of restaurants is complemented by fitness clubs (to burn off those excess calories, I suppose), 'mind and body' spiritual centres (a bit of hypnotherapy, perhaps, to get you back down to ten meals a day?), wine bars, pubs, the marvellous Tana Mana shop which sells imported Indian clothes and furniture and, offering a subtle warning about the consequences of this hedonistic lifestyle, the best Gothic cemetery this side of Bram Stoker's Dracula.

The cemetery is something special. Meandering walkways between lush trees and creeping brambles offer glimpses into the real history of this part of London: soldiers and airmen gone away, businessmen who made their fortune and left it behind; mothers, wives, families of little children lost to illness; rich and poor, young and old... but all at peace on a Sunday morning in the sun. The cemetery is massive, unkempt and unruly, and yet it remains a wondrous place, powerfully suggestive of forgotten history and hidden secrets.

Tales From the Cemetery... 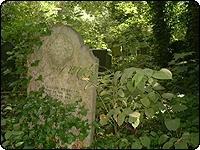 A story once heard by one of the h2g2 Editors concerns an acquaintance who took a short cut through Abney Park Cemetery one evening in winter. He had to jump the tall fence because Abney Park closes its gates every night. The man in question, walking past the uneven tombs of forgotten folk - 'Here lies Constance... Ebenezer... Jeremiah... Ignatius' - became increasingly anxious as he moved deeper in to the heart of the cemetery, covered as it is with hundreds of trees that seemed to groan and whistle out to him in the dark. Quickening his pace he pulled the collars of his black winter coat up to his jowls to keep out the chill and headed for where he hoped the exit was. But then, suddenly, he felt what seemed like a hand press down upon his back. He span round, terrified, but could see nothing. Nonetheless, he was now really scared and started to run as fast as he could, as if his life depended on it. He finally made it out of the woody graveyard- scaling the fence, cutting his shins in the process, jumping with relief back on to the bright lights of Church Street. But he couldn't relax, not until he'd made it home. And so it was he found himself breathing out a huge sigh of relief when he finally closed the front door behind.

He switched on the light, removed his coat, and noticed the clear impression of a large hand print emblazoned on the back of it.

It's been said, often by strangely twinkly-eyed folk, that 'there's magic in Hackney'. While plenty would disagree, Stoke Newington can still lay claim to some 'magic', even though its popularity and the influx of money might eventually drive away its 'soul'. But not just yet. For like so many places with lots going for them, Stoke Newington never seems to rest. There's always something going on, noisy or quiet, peaceful or violent, legal or illegal, happy or sad. Stoke Newington - the old buildings, the tall, majestic church, the cricket square, the narrow, twisting streets, the graves - has been there before. It has had its ups and its downs, and is changing again thanks to 'bright young things' with New Media cash and three-wheeled baby buggies. But Stoke Newington seems to accommodate the antics of those who unconsciously shape themselves to its ways. And if you stop for a minute, you might still feel the magic left in Stoke Newington, in Hackney.

When you've done that, go and get something to eat. How about a two-foot pizza and a bottle of house red at Il Bacio on Church Street?