The Mosquito - Sonic Teenager Deterrent Content from the guide to life, the universe and everything 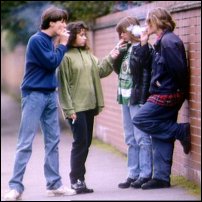 Those of you who have the misfortune to live with an indigenous population of mosquitoes or midges will be familiar with the high-pitched whine as they buzz around your head. It can be just as irritating as the bites. Waving your arms around doesn't really help matters, neither does slapping a few of them against your cheek. You just have to move on, and hope the swarm doesn't follow.

Similarly, those of you who have the misfortune to live in a town centre, perhaps above a parade of shops, will be familiar with another variety of noisy, irritating swarm which you can't disperse: teenagers. Waving your arms around certainly won't help, unless you feel in the mood to have your windows broken with a volley of missiles. Confronting the hoodies face-to-face is frankly more dangerous than catching malaria from the previous swarm; this species is often armed with something more deadly than a pointy proboscis.

But all that started to change, when an engineer from Merthyr Tydfil came up with a quite brilliant invention.

One day in 2005, Howard Stapleton sent his 15-year-old daughter to the local convenience store to buy some milk, but she was unwilling to run the gauntlet of a gang of youths hanging around outside. The shopkeeper wasn't happy with the situation either - unruly children were drinking, smoking and frightening his customers away, as he later discussed with Stapleton. The police seemed unable or unwilling to help.

As chance would have it, he was talking to the right man. In his shed, Stapleton had already developed a prototype sonic deterrent device, which he had tested on his children. He installed it at the store in order to monitor the effects, and they were spectacular: the gang moved off within minutes.

As a child, Stapleton had been aware of the effects of high-frequency noise on young ears since visiting a factory with his father, who was the UK chairman of Ever Ready batteries. Howard was deafened by the ultrasonic welding equipment, but the adults working there couldn't hear a thing.

It's all to do with biology. Our inner ears deteriorate with age - a condition known as presbycusis - and it starts at around the age of 20, when we begin to lose the very high frequency sounds. Stapleton's device emits noise at a frequency of between 16 and 17 kilohertz, but it's very carefully tuned. The noise is pulsed, as this prevents someone from adjusting to it. At 85 decibels, it's loud enough to be irritating after a while, but not so loud as to discourage a teenager from visiting a shop, and certainly not loud enough to damage their hearing. It is effective over a range of about 20 metres.

Humans aren't all alike, of course, and some teenagers lose their high-frequency hearing at an earlier age - attending loud music events probably doesn't do your ears any good in this respect. Conversely, a few will continue to be irritated by the device well into their twenties.

To Market, To Market

The interest was phenomenal. Shopkeepers, councils and the police lined up to endorse the Sonic Teenager Deterrent, rapidly nicknamed and trademarked as the Mosquito. It disperses loitering youths from railway stations, shopping centres and even apartment stairwells. Retailing at £500, Stapleton had sold around 4,500 devices by March, 2007, but it's not altogether been a smooth ride.

Human rights activists Liberty were singly unimpressed. Its head Shami Chakribati claims that the device degrades young people and has branded it a 'sonic weapon'. The debate continues, but this intervention has had an effect on sales, potential customers fearing litigation. Stapleton, on the other hand, is keen to promote responsible usage: only authorised installers are used, and customers are instructed to switch on the device only when groups of youths are present. You can't currently buy one simply to irritate the neighbour's kids in the back garden.

'What goes around comes around', so they say, and teenagers themselves have now had the technology adapted for their own ends. Mosquito ringtones enable schoolchildren to furtively use their mobile phones during class. Advertising agencies have also embedded the high frequency sounds into commercials, to target the young.

Arguably, Howard Stapleton's finest moment came on 24 November, 2006, when he was awarded the Ig Nobel Peace Prize for his invention. Unable to attend the avant-garde awards ceremony due to a family medical matter, Stapleton instead sent an acceptance speech1.

Should Liberty's campaign be successful, and widespread deregulated use would appear to make this more likely, then shopkeepers may need to find other dispersal methods. Playing classical, or indeed any uncool music is one option. Another is the installation of sodium 'zit lights', which embarrass youngsters by highlighting their acne. Norfolk police have also deterred teenagers from stairwells by spraying them with Jeyes Fluid2 - the stairwells, that is, not the teenagers.

In fact, shopkeepers in one or two areas have noticed that robberies have increased since the hoodies were driven away - there are fewer witnesses for one thing. Howard Stapleton may have imagined some of the consequences of his invention, but we'd wager that shopkeepers encouraging teenagers to hang around outside the store, drinking, smoking and thereby deterring armed robberies wouldn't have been one of them.

1Stapleton's slot at the Ig Nobel ceremony was preceded by the eminent mathematician Dr Benoit Mandelbrot, the Sterling Professor of Mathematical Sciences Emeritus, Yale University, delivering a lecture on fractals - in only seven words. For the record, it was 'Beautiful, damn hard, increasingly useful, that's fractals'.2A proprietary brand of disinfectant.