Black Friday - Shoppers' Bliss Content from the guide to life, the universe and everything 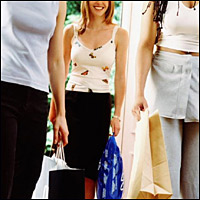 At approximately 4pm on Thanksgiving Day in homes across the US (the fourth Thursday in November), when all that's left of the day's feast is a few crumbs of stuffing and a smudge of whipped cream from the pumpkin pie, the table is cleared to make room for the day's next activity: the reading of the ads.

'Black Friday' is the official start of the Christmas shopping season in the United States. Many US citizens will have the day off work anyway, extending the Thanksgiving holiday into a four-day weekend. That's except for those who work in retail, of course. They'll have to be at work early on the Friday, and are likely work the entire weekend.

By this point there'll have been Christmas merchandise in stores for several weeks. The Christmas merchandising season begins on 1 November and some stores start receiving Christmas stock as early as August 1! But Black Friday is the main event: a feeding-frenzy of shoppers out to grab the best deals, heedless of the well-being and personal space of their fellow citizens. Friday after Thanksgiving shopping is a full-contact sport.

Newspapers on Thanksgiving Day are easily twice the size of the weekly Sunday paper2. The pile of ads is inches thick, each store trying to outdo the next, vying for holiday dollars.

Day-after-Thanksgiving sales are usually held in stages. First thing in the morning come the 'doorbusters', special items at irresistibly low prices, designed to get you up early and through the door. The biggest draws are electronic goods and toys.

It's important to read the ads thoroughly, as they often only apply to stock on hand, which will be limited. Examples of doorbuster draws would be a digital camera for $20, a CD/stereo for $10, DVDs for $3-5, or video games for $10. Doorbusters are usually only good for a few hours after opening, so even if they don't sell out the price will go up when the time expires.

Be warned, though, that doorbusters can be somewhat misleading. Twenty dollars for a digital camera is an unbelievable price when you consider that most start at around $100, and can be as much as $300 or more. The one on sale for $20 will be a very low-end model without many of the features you would want it to have, and it would normally retail for around $50 - $80. Likewise, the $10 stereo will be a stripped down model that normally sells for $30-40. The DVDs and games will be older titles that are normally priced at about twice as much3.

When the doorbusters are gone, don't go home yet - there's still plenty of shopping to do. Stores will continue to have incredible sales all day long. Some may even have hourly specials. At the close of business on Friday don't fret - there's still Saturday and Sunday to go.

To make sure you have enough time to get in a full day's shopping, many stores extend their hours for Black Friday. Most are open by 6am, but some will open even earlier, at 4-5am. For the serious shopper, though, there are a few select businesses that will open at midnight.

Once Black Friday is over with many retailers will observe extended shopping hours through to the end of the year. On average, major retailers will be open from 8am to 11pm daily.

Preparing for the Day Ahead

To get the most out of the day you should have some idea in advance of the items you'll be after. This makes deciphering the ads easier if you don't want to be distracted by 'super specials' that drain your bank account before you can spend money on the stuff you need4.

You'll want to prioritise the items you can get the best deal on against those you simply must5 acquire before supplies run out.

For the actual shopping you should dress comfortably and wear comfortable shoes. Dressing in layers is an excellent idea, as it's likely to be cold outside, and varying degrees warmer inside. Take some snacks or plan a couple of food stops for energy to keep you going.

Get up early. If the store you want to shop at first opens at 6am, there'll be a queue at the door by 4.30am, no matter how cold it is outside.

One person I know paid a friend of his $50 to stand in line for him overnight. When he got to the store in the morning to take over he discovered that the store only had six of the item he was after, and over a 100 people waiting for them.

Expect lots of traffic and long queues. Expect the person in front of you at the checkout to have the ad handy to compare the sales price to the advertised price for accuracy on every item, and to find at least one discrepancy. Expect red Salvation Army buckets everywhere, and bell-ringers who won't hold the door for you if you don't drop some change into one. Expect several people to wish you 'Merry Christmas' whether you celebrate it or not, and at least one person to cuss you up and down for stealing his parking space or cutting in line (whether you've actually done these things or not).

The Truth About Black Friday

The first reference to the Friday after Thanksgiving being 'Black Friday' was in 1975 in two newspaper articles in the Philadelphia, Pennsylvania, area. Both reports were about transport workers, and the term was referencing the high volume of shoppers requiring a bus or taxi service on the busiest shopping day of the year.

In more recent lore, the term is said to refer to sales accounting, meaning the day that businesses go from running at a deficit (in the red) to turning a profit (in the black). This use of the term only dates back to the early 1980s, and isn't strictly accurate. Most sales outlets wouldn't be running in the red for the first three quarters of the year.

Black Friday is the busiest shopping day of the year traffic wise, but isn't the biggest sales day6. The biggest day in terms of sales comes sometime before 25 December, usually the last Saturday before, or 23 December if Christmas is on a weekend. In retail, approximately 25% of sales are made in the months of November and December.

In the new millennium, Black Friday is followed by 'Cyber Monday', the beginning of the online retailers' Christmas season when people log on to find items they failed to nab over the weekend.

1For craftworkers this is through necessity, as some projects can take months to complete.2All of the regular weekly sales flyers are delivered as inserts in the Sunday paper, making it usually about twice the size of the daily one.3It's also true that most of these deals can be found year-round if you know where to look. Online is a good place to start.4'Need' being a relative term here.5'Must' isn't so relative, as anyone who tried to find a Cabbage Patch Doll for their little girl or granddaughter in the 1980s can tell you.6It is in the top ten for sales in the calendar year, nine of which fall in the month of December.