Monument to Peter the Great, Moscow, Russia Content from the guide to life, the universe and everything 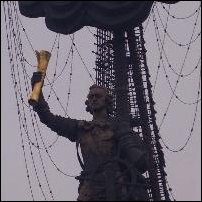 On a curve in the River Moskva, just South of the Kremlin, where the river meets the drainage canal, is one of the world's tallest outdoor statues: Zurab Tsereteli's Monument to Peter the Great1 - a statue so tall that it is topped by an aircraft-warning hazard light. However, it is not the statue's size, artist or subject matter that makes it such a tourist attraction, but its sheer ugliness.

The monument itself stands an impressive 315 feet high, and was commissioned by the Mayor of Moscow, Yury Luzhkov, to celebrate the 300th anniversary of the foundation of the Russian Navy in 1998. The sculpture is the work of the controversial2 artist Zurab Tsereteli and has been described using words such as strange, unusual, unique, horrendous, awful and soul-searingly hideous.

Words cannot really do the Peter the Great Monument justice, as it really has to be seen to be believed, but it takes the form of a greenish-blue life-sized frigate atop a stylised plume of water, made from bronze. Jutting out from the plume are the bows of a number of smaller ships, each sporting a gold-detailed flag. Standing proudly on the deck of the frigate, wearing a toga and brandishing a golden scroll, is Peter himself. And he looks absolutely disgusted.

To see the Monument in all its kitsch awfulness, go to the artist's website.

The statue was designed and built by Zurab Tsereteli, a Georgian-born artist who has secured more international commissions than any other artist in Russia, despite a portfolio containing a few infamously awful creations. His 660-tonne statue of Christopher Columbus was rejected by no less than five American cities before ending up in Puerto Rico, his 9/11 memorial3 in New Jersey has been described by a survivor of that attack as resembling 'a cross between a scar and a female sexual organ', and his statue of Diana, Princess of Wales has remained strangely absent from the Moscow Museum of Modern Art. All in all, Tsereteli is hardly the Michaelangelo of his generation, and the Peter the Great Monument can be seen as a shining example of his 'talents'.

Even if the Peter the Great Monument had been a fantastic piece of artistic beauty, the chances are that Muscovites would not have been particularly welcoming to it anyway. Peter was reputed to despise the city of Moscow and designated his own city, St Petersburg, as capital of Russia in 1712 - an act that would hardly endear him to the proud inhabitants of Moscow. This disdain for Peter, combined with the fact that between US$11 million and US$20 million4 of public money was spent on the monument, and the fact that it is regarded by most Muscovites as an eyesore means that it is hardly beloved of the local people.

If you ever find yourself in Moscow, make sure to have a look. Then wash your eyes and go and look at the beautiful monuments in the VVTs5.

1Peter I, Pyotr Alexeyevich Romanov or Pyotr Veli'kiy, depending on who you ask.2As much for the perceived link between his friendship with the Mayor of Moscow and the resultant allocation of municipal funds as for his artwork.3Photograph of the 9/11 'monument'.4Rough Guide to Moscow gives the smaller figure, The Moscow News the greater.5The VVTs, or 'All-Russian Exhibition Centre', contains a number of impressive pavilions, a stunning golden fountain and a monument to the agricultural workers of the USSR. Not bad for something described as a 'Stalinist Theme Park.'