Bowie Knife - The Choice of Legends Content from the guide to life, the universe and everything 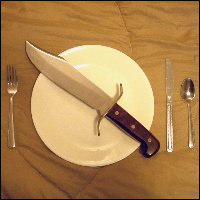 The bowie knife is the namesake of Jim Bowie (1796 - 1836), its putative inventor, and certainly both were born to brawl. Jim Bowie1 only lived another five fairly violent years after its invention. He died at the Alamo2, but his knife lives on. Well, perhaps not the original - but these startling blades are still made today.

In the interest of full disclosure, it should be mentioned that the telling of tall tales was almost compulsory among the men of Jim Bowie's time and place, and the truth would never have been allowed to get in the way of a good story. So a fully accurate history of the knife becomes somewhat problematic. In any case, rest assured that we shall not deviate even one whit from the truth unless it is absolutely necessary. You can count on it.

The first bowie knife is thought to have sprouted a blade anywhere from 10 to 15 inches long that was two inches at its widest and a quarter-inch thick. Later models had even longer blades and were carried in a sheath slung over the back. If we are to believe that Jim Bowie invented the knife then, initially, there would have been two prototypes. The first is reputed to have been a wood model whittled by Jim Bowie to show the design to James Black, his blacksmith. The second, also reputed, was a finished knife that James had modified so that the curve along the top of the blade was also sharpened and this is the one that Bowie took with him.

On the other hand, George Wostenholm of Sheffield, England is also claimed to have been 'acting on the instructions of legendary American frontiersman Colonel James Bowie' in the development of the very first bowie knife. A knife bearing the Wostenholm I*XL trademark is said to have been found on his body when he was killed defending the Alamo in 1836.

So, you can see the difficulty. Neither Jim Bowie's first knife nor his last are around today to settle the matter, and finding either one would be like finding King Arthur's sword.

To make matters worse, it's not known for sure that Jim Bowie was in fact the inventor. Other credible claimants include his father Rezin Bowie, and his brother Rezin P Bowie. What we do know is that Jim is the one that made it famous.

It is said that the knife enjoyed instant popularity when it became known, or at least believed, that shortly after taking possession of his new knife, Mr Bowie used it in what is known as the 'Sandbar Duel'. This was a duel that expanded from the usual two participants to as many as ten. According to accounts, Mr Bowie was shot twice and stabbed once during the melee. This could be true. It is also said that he disemboweled one gentleman and nearly decapitated another. Well, who can say? Nevertheless, there were plenty of other legendary men wandering about at that time, including Davy Crockett and Daniel Boone, and a really huge knife seemed to suit them exceedingly well.

A legend in his own right, David Jones changed his last name in favour of the knife early on and for reasons best known to himself, but as explained more or less in a 1974 co-interview with William S Burroughs in the Rolling Stone magazine:

Burroughs:  The weapon of the Wild Boys3 is a bowie knife, an 18-inch Bowie knife, did you know that?

Bowie:  An 18-inch bowie knife... you don't do things by halves, do you? No, I didn't know that was their weapon. The name Bowie just appealed to me when I was younger. I was into a kind of heavy philosophy thing when I was 16 years old, and I wanted a truism about cutting through the lies and all that.

Burroughs:  Well, it cuts both ways, you know, double-edged on the end.

It's Really Quite Useful

Although handy in a fight, the Bowie also makes an excellent all-around tool. Unlike the Swiss Army Knife which is useful because of a multiplicity of gadgets, the bowie knife achieves versatility due to its sheer weight and size. It can be used as an axe, a machete, a mallet, a canoe paddle, a pry bar, a mirror, and a razor. In fact, it's even a great can opener for those who are short on patience and don't mind some spillage.

It does seem that at least one attempt was made to add gadgetry to the bowie. According to an h2g2 Researcher, someone tried to combine the gun and the knife and 'produced a bowie knife with a derringer in the handle - it wasn't popular.'

Well-made bowie knives of the day would have been exceedingly well-balanced and it should not be too surprising then that people soon tried their hand at throwing them. It is known for certain that soldiers in the American Civil War enjoyed this activity. It should be noted however that knife-throwing was, and is, purely recreational and stories involving one person killing another using deadly aim are usually just that: stories. There are exceptions of course, but consider for a moment that, during actual combat, the last thing you would want to do is throw what may be the only weapon that you have over to your enemy. The best outcome that you could hope for is that he will be equally foolish and throw it back.

Out of the Wilderness

The bowie blazed a path through the American wilderness and while much hyperbole attends its history, there is no question that the bowie attended all major campaigns of the time as Americans set out to realise their Manifest Destiny and settle the country from the East to the West coast - in spite of all of those who were already living there and who seemed to resent the intrusion into lands they considered already settled.

And as the Sun Set Slowly in the West

...so did the glory days of the bowie knife begin to dim. Guns of this time had a habit of jamming which was just really inconvenient, and so the bowie remained the weapon of choice for close-quarters combat. That is, until the arrival of the equally legendary Colt revolver - an 1844 Walker model to be exact, but of course that is another story.

1Pronounced Boo-ee2Remember the Alamo?3'The Wild Boys: A Book of the Dead', by William Seward Burroughs