Escaping the Average Small Town in the North of the Netherlands Content from the guide to life, the universe and everything 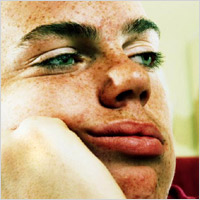 So, are you, a lively youngster, living in the Netherlands all of a sudden? More specifically in the northern half? Even more specifically, somewhere smaller than a decent-sized city?

If so, then you'd better decide your goals and priorities, and figure out what you want the coming years of your life to be like. Think fast, decide whether you want to spend time here, and if so, how long. Because life in this place may well be as strange to you as eating with a spoon is to a coral crab. In time you might be able to manage it, but meanwhile there is a definite chance that you will go mad and start foaming at the mouth.

If, after careful deliberation, you have chosen to embrace this way of life and want to spend your remaining earthly days here, congratulations. Take a moment or two to bask in your new-found glorious lifestyle, while we focus on getting the others out. Because a lot of you will probably have already raced through town, seen nothing of interest to you and decided that you really want to leave. For people unaccustomed to rural life, the sudden change of environment can be shocking. So here's the routine to getting to the big city.

If you have to travel by means of public transport, you might just find yourself in a sticky situation – especially if you're in a really small town. The major bus companies in this part of the world have a simple equation for scheduling their buses, so as to cause as little harm as possible to the surrounding habitat. Essentially, it involves the size of town any particular bus has to visit on its route; in a nutshell, the smaller the town you are in, the fewer buses you will encounter.

Between 8am and 6pm, you're probably lucky, since a lot of school kids use buses to get to where they're going. The companies practically earn their living from schools, so they will usually have buses about when the schools are in, hence the major bus routes usually have at least four stops near to a school. However, the downside of this time frame is that you will very likely be travelling with a pack of school-age children travelling to or from their school — and this is always a bad thing!

School children are not like (other) people, especially in this part of the world. They are noisy, loud mouthed, considered by most outsiders as offensive and evil; they never, repeat never travel alone. For this reason you would be well-advised to avoid bus travel between 8am and 10am, and again after 2pm, leaving you just a four-hour window in between. After 6pm it's unlikely that the buses will continue to run. From 2pm until 6pm, students are continually emerging from schools, keeping the buses filled, so it is at these times that you are most likely to become crammed into the bus with hordes of bloody-minded teenagers. At rush hour, there will be absolutely no space left in the bus for such things as backpacks, guitars, or legs, and the sound produced by the mob will be horrendous. Everybody on the bus will have someone to talk to, because the chances of encountering someone you know are just so great. The bus will probably rush through 5 or 6 villages, and everyone knows everyone in a village, including everyone on that bus. Rush hour is just a dangerous time to travel by bus — think of your own safety. Also keep in mind the chance that you might have to take another dangerous bus ride, since there is a distinct possibility that the place the first bus takes you is another village; not as small, but small enough not to have direct routes into the cities. Beware of this when you plan your trip.

Now, if you are unlucky enough to have to travel in the evening, you just can't count on public transport to take you anywhere. The typical thing to do is to see if you have any relatives or (good) friends living nearby to fall back on. Of course, the native Dutchman would have tried to avoid this situation completely by changing travelling times or modes of transportation, but were he to find himself in this particular situation, he would count on others — by wangling some transportation, or in some cases even arranging a sleep over. But you want to get out, so you ask around for wheels. It is not uncommon to give friends a ride to their destination, usually by car, especially in the evening or for distances over about 15 km. If you plan on going somewhere where it will be secure (a private residence rather than just a public location), it could well be the case that the friend has a spare bike to lend you. This saves money on car fuel, and it's easy to pick a bike up again after lending it to someone — the borrower might even return it personally!

When is a Taxi not a Taxi?

If, by chance, you don't have any relations nearby — which begs the question why on earth you went to a place in the middle of nowhere, and to which you have no connection — all hope is not lost. If you need to travel within reasonable hours of the day, and you don't look too scary or weird, hitching a ride is definitely an option to consider. The best time for this is around 7pm in summertime. That's after dinner, so people will probably be in a friendly frame of mind; there's not much to do after dinner, so there's a good chance people are getting bored anyway. If you're really feeling lucky, put on some puppy dog eyes and ring some doorbells, asking for a ride.

If you do get a lucky ride with a stranger, pay the driver afterwards. It is seen as good manners, since you have taken up their valuable time and, more importantly, their petrol or diesel! People don't like spending money on fuel unless they really have to. The car is an expensive form of transport, so paying your share of the expenses is no more than is customary.

How and What to Pay

Payment can be anywhere between €0.25 and €1 per kilometre for distances of between 10 and 30 km. So for a 20 km drive, €5 to €20 is acceptable, often rounded up to the nearest combination of banknotes. Don't fumble with coins; you'll just look silly, and it will probably be seen as an insult, as if you were handing petty change to a hobo. For distances over 30 km, you are unlikely to get a ride — you could try to do it in stages — and for a distance of less than 10 km, payment will usually be waved away.

Mind you, after other rides payment will probably also be declined at first, but this is purely part of the accepted routine. You hitch a ride, say thanks afterwards and offer money. They say they really couldn't, you say you must insist, they take the money and leave. It makes them feel good about having made a Samaritan-like offer, and even better about having done such a splendid job that you insisted that they be paid. Everyone wins; they get their pay, and you save a lot of money on cab fares.

If All Else Fails

A cab is, of course, your very last resort, as it is ridiculously expensive — especially in these rural parts of the world, where you can easily find yourself on a street looking out at emptiness for miles on end in all directions. It is not in the least unlikely that you would have to pay €2 per km for a cab. It is far better to walk than to take a cab. Alright, it takes its sweet time, but look on the bright side – you have some of the most beautiful scenery on the planet at your fingertips, and it costs you absolutely nothing! And besides, you could do with a little exercise.