Passing Your Motorbike Test In The UK Content from the guide to life, the universe and everything 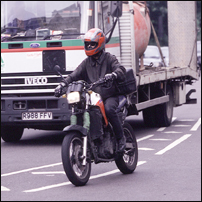 This Entry describes the requirements to pass your motorbike test in the UK. However, most of the manoeuvres and guidance listed here are applicable across the world, and besides, the rules and regulations are constantly changing, so do check what the current position is with your instructor.

You need some sort of licence even when you are learning. For brand new riders this will be a provisional licence. Those who already have a car licence will find that this entitles them to ride. In both cases, you must display red L plates, not go faster than 45 mph, and not ride a bike bigger than 125cc1.

In the UK (except NI), you must first pass Compulsory Basic Training. This covers the basics and takes you from changing gear, slow-speed riding right up to a real session riding on the road proper. It typically takes a day and costs about £100.

While you could get your mate to show you what to do, it is well worth investing in lessons from professionals. They have the experience to know what the examiner is looking for, and will also have several techniques to suggest to help you manage the various manoeuvres. In addition, if you have different instructors watching you ride, they will pick up different things that need correction (eg, keeping the back brake on too long, doing shoulder checks too soon or too late, having your arms too stiff).

Before you can sit the practical test, you need to pass a theory test. This is in 2 parts: a multiple choice set of 36 questions on the Highway Code, and a Hazard Perception video test showing 15 scenarios where you have to click when you spot a developing hazard. This could be a pedestrian stepping off the footpath, a fire-engine coming from a side road, or someone emerging from behind a van. A useful self-talk when observing is 'there's the milk-float, where's the milkman?' Get familiar with these from free tests available online, or on DVDs.

The test will require you to demonstrate various specific manoeuvres, namely:

Apart from the manoeuvres listed above, the following play an important part in the test:

In the UK (but not NI), if you are over 21 with a car driver's licence you can take an accelerated route into riding big bikes by doing a Direct Access course. This is offered by many different riding schools and bike manufacturers, and can take as little as a week. After this you are not restricted to the 33bhp, and can ride any bike you like. A useful website for deciding which route to learning is best for you is at getintobiking.com.

What if I fail?

Do not panic about failing. If you ask around your biking friends, you will doubtless find that some of the best riders did not get their test on the first attempt. Most famously and publicly was Claudio von Planta, the cameraman who accompanied Ewan and Charley2 on 'The Long Way Round'. The pass rate varies from centre to centre, but is normally somewhere around 60%. So about 1 in 3 people fail. It's not the end of the world - you can re-sit as often as you like. You will get a list of your faults, so you can concentrate on the areas that need to get better. Try not to set yourself deadlines such as 'Oh I have to get it before I go on this road trip in June!'

What if I pass?

After you've finished celebrating, you get to look at lovely pictures of shiny new bikes, and kick a few tyres in showrooms. Then remind yourself that you're likely to drop it while you hone your riding skills - might you be better off with an older, used bike? Consider the weight and height of the bike, as well as the riding position. For 2 years after you pass, you will be restricted to a power of 33bhp (25kW), although restrictors can be fitted to most bikes. In NI, you must wear R plates, and restrict your speed to 45 mph for 1 year after the test. Send off your licence and your test pass certificate to be updated. Take photocopies before you do, so that you can check that no details have been missed when you get your licence back. And remember - keep her shiny side up!

1This refers to the bike's engine capacity, which is measured in cubic centimetres.2Actor Ewan McGregor and his pal Charley Boorman travelled around the world on a couple of BMWs, and made a TV series of their trip.