The Zabbaleen - Cairo's Rubbish Collectors Content from the guide to life, the universe and everything 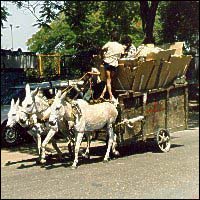 Cairo, the capital of Egypt, is one of the world's largest cities, with in excess of 15 million inhabitants1. Those millions of people produce a lot of waste. Initiate an expensive integrated waste management programme? In Cairo? One of the world's fastest growing cities? In a country not exactly rolling in money? No chance. Luckily, Cairo has the Zabbaleen2.

Cairo has been the destination of many a migrant worker since the 19th Century, when the country began developing and urbanising. In the 1890s, a group called the wahiya arrived in Cairo. They collected the city's organic household waste and dried it in the sun to make fuel which they could then sell. Later, around the 1950s, a group of pig breeders from southern Egypt came up the Nile and formed a relationship with the wahiya. They were Coptic Christians3, not Muslims, so there was nothing in their religion against the keeping of pigs. These pigs were very valuable as pigs will eat almost anything and consequently they were a great way to get rid of organic waste.

The wahiya got a rather better deal. Invoking the ancient right of 'I was here first', they retained the rights to the waste and acted as middle-men. The newcomers, called the zarraba were the collectors. Slowly these two groups became integrated and became the Zabbaleen.

People of the Rubbish

'Zabbaleen'4 means 'people of the rubbish' in Arabic. Hardly flattering, you might think, but these people are vital to the day-to-day running of the city. Before the 1980s there was no official waste collection service in the city; the Zabbaleen did all the work.

For a long time the Zabbaleen were not acknowledged for the work they did. They were marginalised by their Christian traditions, the pigs they kept, and their unsavoury image. They lived at the bottom rung of society, dwelling in a number of squatter settlements on the fringes of the city - a city that produces some 10,000 tonnes of rubbish every day. About 60% of the city's rubbish is collected, and the Zabbaleen take two thirds of this; the remainder is taken by the state rubbish collectors. However, there is some resentment against the 'official' workers because the service they offer is far more expensive. The Zabbaleen work for very little, often for nothing, because they make their money from the waste they collect.

The system the Zabbaleen have developed is remarkably efficient. Each morning the men tour parts of the city in their donkey carts or small trucks, collecting waste. They then drop it off at their homes, where the women and children sort it. 85% of all that is collected is recycled and used to make quilts, rugs, pots and paper. The best Western recycling schemes can manage around 70%. The secret is that the Zabbaleen do not use the large trucks which compact the rubbish. Once it has been compacted, it cannot be easily sorted and can only go to landfill.

In Moqattam, where the Zabbaleen - or garbage people - live, the stench of rotting trash is almost unbearable. Garbage is piled three stories high, pigs play in pens of thick, black mud, and streets ooze with waste.
- one journalist's description of the main Zabbaleen settlement.

Moqattam and the other Zabbaleen towns in Cairo - with a population totalling 70,000 - appear to be terrible places to live. But they are slowly being improved. The Zabeleen are gradually improving the quality of their lives with the profits they make, replacing the corrugated iron that many houses are built of with sturdy brick. It is around these makeshift dwellings that a community that doesn't know the meaning of the word 'waste' has developed.

At first, the city authorities tried to evict the Zabbaleen and stop them settling in the city, but then they realised what a valuable service they provided.

In 1980, the Zabbaleen community joined up with a technical assistance group, the local government, and international donors (such as the International Development Association of the World Bank) in the Zabbaleen Environment and Development Program. Prior to this, there was no local government, services or any infrastructure. Fires often swept the neighbourhood due to the lack of a water supply.

Over a span of ten years, activities were targeted at improving living conditions, and increasing the service capacity of the Zabbaleen. A school, outpatient clinic, park and children's club were constructed in Zabbaleen settlements, helped by government funding. Credit systems were set up allowing them to buy the land they lived on over a 30-year plan or to invest in new business opportunities. Infrastructure like water, sewage and electricity were provided and education initiatives set up.

In 1982 Oxfam funded a Route Extension Project which extended the Zabbaleen collection routes to 8,000 new homes in a neighbouring low-income area. Programmes for women were initiated, such as rug weaving and literacy classes, a paper recycling project and a health awareness programme for pregnant women.

The proudly independent Zabbaleen community developed some kind of symbiotic relationship with the authorities: they collected the rubbish efficiently, cheaply and ingeniously, and the city legitimised their existence.

As a result of these initiatives, 300 families were settled instead of being evicted. Health conditions, previously very poor, were greatly improved5 and literacy rates increased drastically. In turn, this has resulted in an increase in the Zabbaleen population. Moqattam expanded to approximately 1,500 houses in the settlement, many of which were multi-storeyed concrete structures, more than double the some 700 shacks in the area in 1981. The number of inhabitants almost tripled over 12 years, rising from 5,881 in 1981 to 16,600 in 1993.

Many young Zabbaleen now specialise in recycling high-tech goods and supply local businesses with second-hand electrical parts. They are also constantly improving their operations; for example, simple technology is being used to quickly produce good-quality compost from organic waste, which can then be sold. They are proud of their heritage and not embarrassed that they collect rubbish, not just for a living, but as a way of life. 'It is in our blood,' says one woman.

In 1998 the Zabbaleen won an award from the UN (United Nations) in recognition of their work, and for their success in persuading the government to legally recognise their settlements. The success of the Zabbaleen spurred similar projects to be set up in Manila and Mumbai, helped by funding from the UN.

In 2003, the Egyptian government announced its plans to modernise and 'Westernise' the city's waste management system, claiming the Zabbaleen's methods were backward and unhygienic. This is not entirely false. Although conditions are improving, diseases such as hepatitis are common. This is hardly surprising when rubbish, including sharp metal, broken glass, and hospital waste such as syringes, is sorted by hand. However, the Zabbaleen were joined by many international aid agencies in protesting that the only way to lift them out of poverty was to allow them to keep their jobs as the city's rubbish collectors. In a country with a 10.8% unemployment rate and with 20% of the population living in poverty6, they had a point.

One of the reasons for the drive for 'modernisation' was the aesthetic problems the Zabbaleen created. As early as 1987 a decree was issued attempting to ban their donkey carts. This was later relaxed so as to bar them only from the wealthier areas frequented by tourists.

The three European companies hired to clean up Cairo cost $50 million a year, and recycled at best 20% of the waste they collected. The companies offered to hire the Zabbaleen as collectors, but offered as little as a dollar a day - half what a Zabbaleen can earn working for himself. However, the privatisation system has failed, leaving the city with litter-strewn streets and the continued use of the unsanitary landfill sites. Some have claimed that all the new modernisation initiatives have done is inspire a new generation of street waste collectors.

We don't like attention. Rubbish is never attractive and we're quite happy carrying on quietly... but our work supports a whole industry that's virtually invisible to most people.
- a member of the Zabbaleen community.

There is an interesting element of altruism in the Zabbaleen society, perhaps born out of the poverty they live in. In a short film, which won the 2006 Grand Jury Prize at the Exposures UK Student Film Festival, and is highly recommended, one man describes how he once found a baby girl's earring in the rubbish he collected. Rather than keep this valuable item, he returned it to the owner. The film gives an excellent insight into the lives of the Zabbaleen.

1There is a huge range in population figures due to the difficulty of tracking them all.2Sometimes this is spelled 'Zabaleen'.3Native Christians, communities of which sprung up in Roman times.4Incidentally, the word, coming from zbaleh the Arabic for 'rubbish' is used throughout the Arab world for rubbish collectors of all sorts. Cairo is unique in having a whole community of them.5For example, infant and child mortality decreased from 240 per thousand in 1979 to 117 per thousand in 1991.6Defined according to the UN's Human Poverty Index (HPI-1).