Australian Huntsman Spiders Content from the guide to life, the universe and everything 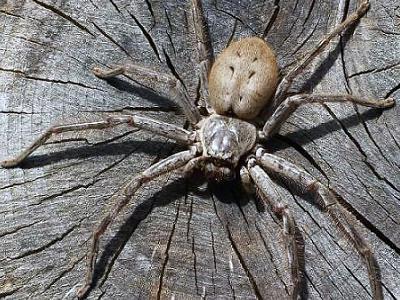 In Australia, particularly the south-eastern corner (Sydney, Melbourne, Adelaide, and all the bits in between), it is not uncommon to wake up in the middle of the night and come face-to-face with a huntsman spider crawling up your blanket. These creatures love to hide in warm, dark places, under or in sleeping bags, behind curtains in Youth Hostels, under the sun-visor of your car or in the glovebox of that tired old Volkswagon you bought for A$100 from the place just outside Wagga with the shifty bloke with too tight shorts on. They can be found just about anywhere.

And they're big. And hairy. And really big.

Nicknamed 'the Aussie Tarantula', the spider can grow to the size of a large adult's hand, but funnily enough they're quite innocuous. Despite their name. Honest.

Along Came A Spider

Australian Huntsman Spiders belong to the Sparassidae (formerly Heteropodidae) family of arachnids, and the most common varieties in Australia are the Badge (Neosparassus) or Brown (Heteropoda). Other species, either native or introduced, can be found not only in New Zealand and much of Australasia, but also South East Asia, the Middle East and the Americas. Huntsmen are usually a dullish brown or grey in colour (or a mix of the two), with some having blackish bands around their legs, while the badge huntsman may also have a black 'badge' marking on its abdomen. Many have flattened bodies adapted for living in narrow spaces, such as under the loose bark of trees or in-between rocks in the bush. Or more often behind doors or places where your hand has just been.

Huntsmen are an oddity in the spider world to some extent, as their legs are designed in an altogether different fashion to many of their smaller relatives. Instead of bending vertically in relation to the body, a huntsman's legs have the joints twisted so that the legs will spread out forwards and laterally, in a crab-like fashion.

I recall finding a huntsman down beside my bed when I was younger. It must have been as big as my head! I yelled for my dad who came in brandishing an empty ice-cream container and he clapped it over the thing, its legs still sticking out the sides. We took it outside and it ran, or rather scuttled, off like a crab!
- an h2g2 Researcher reminisces about a huntsman

Come Into My Larder

Huntsmen eat a variety of insects, so they are often found living in trees or other plants to catch things like flies, aphids or other small beetles, piercing them with their two long, curved fangs. The huntsman does not spin a web so has to make do with natural or man-made cover. This can include anything from the garden shed to the kitchen curtains. They prefer somewhere with a little height however, as like all spiders, the huntsman moults when growing and gravity assists the spider in discarding its old skin. This skin is often mistaken for the original spider when seen suspended on bark or when brushed off the lampshade onto your shoulder.

It's In The House!

Huntsmen can live just about anywhere warm and dry. This includes human dwellings. But not many people are too keen on that, as the huntsman is rather large, can move like greased lightning and well, it's a spider. But having a huntsman in the house isn't such a bad thing, as they will eat all the other nasty little spiders that can cause mischief - not to mention the ever-present, never-out-of-the-kitchen, always-buzzing-about flies. They will do this for a couple of years once they've found a nice place to settle:

Huntsmen are lovely things, and make good low-maintenance pets. Rather like cats, they choose who they want to live with and then just move in. I have one in this house now, which may explain why I haven't seen any other spiders for a while.
- an h2g2 Researcher

Huntsmen have a life-span of around two to three years, so once you've got one, look after it. If you can't deal with it in the house, don't just stamp on it. Try to capture it and set it free out in the garden. Remember the age-old adage; 'If you want to live and thrive, let the spider run alive'.

Are You Sure It Won't Bite?

Well, no. Usually they are quite placid, but the female lays up to 200 eggs and guards them, not leaving for around three weeks. For this reason they can be pretty nasty if defending their eggs and young. The effect of a huntsman bite on a human is usually minor swelling and localised pain to the bitten area, and they should recover in a day or two. However, some badge huntsman bites have caused prolonged pain, inflammation, headache, vomiting and even irregular pulse rate, which can be life-threatening in either the very young or very old. Usual first aid for a huntsman bite is the application of a cold pack of some sort to relieve the pain and swelling. Of course, if the victim is just not improving, it's advisable to nip off to see a doctor.