Possums Content from the guide to life, the universe and everything 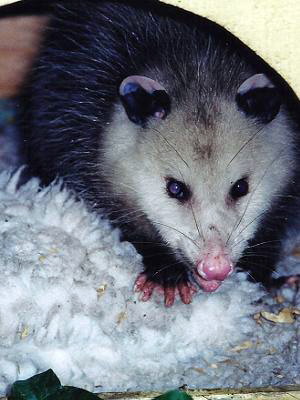 The possum is the only marsupial native to North America, particularly frequenting the area from West Virginia to South Carolina. Despite this claim to fame, possums are fairly unknown animals to much of the American public, except in jokes about road-kill. For those who may never have seen a live possum, it bears a great similarity to most rodents, looking much like a giant piebald rat. Its paws are adapted for grasping tree limbs, and look much like human hands. A stripe of dark brown-black fur runs along the possum's back, and fur of similar colour covers the legs on and above the feet. Possums have long, bald, prehensile tails with which they can hang from tree branches.

When confronted by another animal, the possum will hiss, bare its fang-like teeth, or play dead. Despite this apparent fierceness, it will not bite you unless you place your hand directly into its mouth. The possum's diet consists of small animals such as baby birds and rodents, and other dead animals. It is mainly a scavenger, and does not hunt often.

Female possums keep their young in a pouch on the belly for several weeks. Its young start out the size of kidney beans, and the female can keep about a dozen young, sometimes more, at once. The male possum dies soon after mating.

As they grow older (typically two years), possums become blind, and fall easy prey to cats, dogs and, as is readily apparent, automobiles. They cannot be domesticated, as they are far too stupid - a possum's brain is about the size of a kidney bean.

Possums are also found in other parts of the world. A black-furred possum, with a shorter snout and fur-covered tail lives in Australia, as does the Sugar Glider, a type of tiny, flying possum with two dark stripes on its head and flaps of skin between the front and back legs to create wings. It is much more popular as a pet than the North American variety.

They were introduced into New Zealand by the British, where they adapted to the environment and are now seen as pests to be controlled (unlike in Australia where they are an endangered species).