Teotihuacan, Mexico Content from the guide to life, the universe and everything 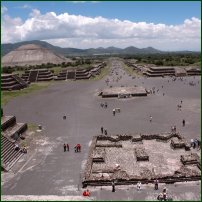 At its peak some time around 500 AD, the city of Teotihuacán1 was home to almost 200,000 people, making it probably one of the largest cities in the world2. When the Aztecs, who founded their capital city Tenochtitlan nearby, first saw the remains of the city centuries later, they gave it the name Teotihuacán, which means 'The City of the Gods'. Such was their awe at the ruins that they thought it was built by a race of giants. Even today, it remains a mystery as no written records were left and the builders' culture had ended before the Spaniards arrived.

The city of Teotihuacán can be found 30 miles northeast of Mexico City. The city is located in a fertile valley in the Central Highlands at around 20°N latitude. Thanks to the abundance of water in the area, agriculture thrived and allowed the city to grow to its great size.

The city had been founded near to a number of lakes3 in around 500 BC and it existed until 750 AD. During this time it became a major commercial centre and then suddenly it was deluged with refugees from the nearby city of Cuicuilco. Cuicuilco was an organised city but lived under the threat of an active volcano called the Citle, which of course one day did erupt. The cataclysm destroyed the city of Cuicuilco, causing most of the inhabitants to flee towards Teotihuacán. With them, they brought knowledge of astronomy, mathematics, architecture, and many other things. This new knowledge enabled the new city to expand further, and eventually it became the greatest city in the world. Historians and archaeologists have since divided its existence into four periods which match four of the periods within the general history of the Mesoamerican lands.

The city was first founded by a group of people called the Teotihuacános during the late formative period somewhere around 500 to 100 BC; at this time the only part of the city that existed was the smaller northern section.

The second period occurred during the proto-classical period, from the end of the first period until the year 100 AD. At this time, the empire of the Teotihuacános is thought to have stretched across much of Mesoamerica; however, it wasn't an occupying force. Much of its territories merely paid tributes to feed the growing capital that eventually reached a maximum area of some 22.5km2. The city became the centre of a vast trade network and was especially important to the trade of the extremely useful black volcanic glass obsidian. Both the pyramid of the Sun and the pyramid of the Moon were built during this time.

By the third period from 300 - 600 AD, when the classical period was showing great splendour throughout Mesoamerica, the city was some 20km2 with over 200,000 inhabitants. During this time, the temple of Quetzalcoatl was built.

This last period was from 600 - 750 AD and this was when the city suffered most of its damage. After the destruction of the city, most of the people moved to the nearby city of Cholula.

The City of Teotihuacán was very advanced for its time: early in its construction the city was laid out with a grid structure familiar to many American cities today. As well as the many residential dwellings, huge and impressive palaces and pyramids were built. The three most important pyramids in the city were the pyramid of the Sun, the pyramid of the Moon and the pyramid of Quetzalcoatl.

Through the religious heart of the city runs the street now known as Los Avenida de los Muertos ('Avenue of the Dead'), which ran straight from the outskirts directly to the religious heart of the city. Some two kilometres of the street is still visible today. It is an impressively wide road that is broken into plazas where it reaches the city centre; however, what makes it so impressive is not its size but the structures that sit on it, dwarfing any surrounding buildings. At the southern end of the religious centre is the Ciudadela, and the pyramid of Quetzalcoatl. The pyramid of Quetzalcoatl is a smallish building, but it boasts many decorative carvings and statues of the Plumed Serpent God and the Rain God Tlaloc. Continuing along the Avenida de los Muertos, the visitor comes to the most impressive building of the the city - the pyramid of the Sun. It stands 215 feet (65m) tall - this makes it the fourth tallest pyramid in the world after the Egyptian pyramids of Cheops and Khafre at Giza, and the Red Pyramid at Dahshur4. Further north along the Avenida de los Muertos sits the pyramid of the Moon and the palaces of the jaguar and Quetzal-butterfly. Most houses of the poorer people cannot be seen, since most have been destroyed by now. It is known, however, that they were dark and cramped.

As with all of the Mesoamerican civilisations, the Teotihuacános were extremely religious. Many religious artefacts and buildings have been found in and around the city. The most important of these were the three pyramids that were mentioned before: the Sun, Moon, and Quetzalcoatl pyramids. These were all dedicated to one God and were really just elevated temples. The pyramids started life as a method for protection against animals, plants, and the elements but slowly, they became more majestic and as a way to honour the gods.

Priest were very important for the Teotihuacános. They were the representations of the Gods, the ones in charge of watching the Sun and Moon movements, in charge of the calendar, the cities, ceremonies and the ones who controlled the society. The Priests were also in charge of the human sacrifices and bones of the sacrificed may be found inside of the Pyramid of Quetzalcoatl, supposedly sacrificed at its inauguration. The people lived under a theocracy, where the Priests had absolute and divine authority.

The symbols of the jaguar, the serpent, the snail and the bird were the four most important symbols for the Teotihuacános. The jaguar represented religion and religious ceremonies. The serpent meant rivers and the pathways left by them. The snail was the symbol for fertility and Birds were the representation of clouds.

The city of Teotihuacán declined from one of the biggest metropolitan cities in Mexico during the 5th and 6th Centuries to a virtual ghost town in the 7th and 8th Centuries AD. Although archaeologists can document the actual abandonment of the city, there is little evidence pointing to why this happened. An increase in the amount of militarism in art and artefacts of that period suggests an increase in warfare which could be a possible explanation. After 750 AD there is evidence of ritual-like burning of the monuments and temples of the city which has been associated with loss of power and decline. Even after its decline, Teotihuacán's influence could still be felt: the Aztecs were in awe of the site, they truly believed it was the birthplace and home of the Gods. When the Spanish arrived in 1519, many Aztecs thought these strange white men were their God's emissaries that were returning home; this belief helped the Spanish Conquistadors' subjugation of a powerful nation.

Teotihuacán today is one of the most visited ancient sites in modern Mexico: sitting just outside the capital Mexico City, it makes a fascinating day trip. Much of the ceremonial heart of the city is still intact, despite being over 1,000 years old. It is possible to climb the mighty pyramid of the Sun and survey the surrounding buildings. Compared to other sites in Mexico, one of Teotihuacán's most amazing features are the murals that are still intact depicting scenes from Mesoamerican mythology.

Buses to get to Teotihuacán leave from Mexico City's north bus station every half an hour or so. Check to make sure the bus you are catching is going to the 'Los Piramides' and not the nearby town of San Juan Teotihuacán. The journey takes about an hour; make sure that you check on the return times to the city before you get off. The site entrance fee is surprisingly cheap, like in many other Mexican ancient sites; even the entrance fee to the museum is included. The site is open from 8am to 5pm with the crowd at its heaviest from about 10am to 2pm, especially on Sundays and public holidays. Remember to take sunscreen and a hat, as even when Mexico City is grey and overcast, the site can be bathed with brilliant sun, as this Researcher found out to his detriment during his visit!

1Pronounced 'Teh-oh-tih-wah-KAN'.2By comparison Western Europe at the time was deep within the Dark Ages and the population of London was less than 5,000.3Having a permanent source of water was a very important commodity in the dry lands of central Mexico.4In fact, it shares the fourth position with the Pyramid of Menkaure, the third Giza pyramid.