Postcrossing - The Postcard Crossing Project Content from the guide to life, the universe and everything 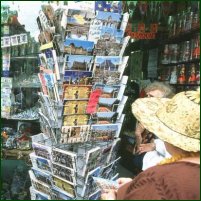 It has been said that email has been the death of the letter. It has certainly become a lot quicker to send an electronic message than it is to put pen to paper, affix a stamp and wave the letter off on its journey to the recipient. It could be contended that telephones, the mobile type in particular, are also a contributing factor to the demise of traditional post, especially with the advent of text messaging. The cost of sending a letter (stamps, paper, ink) might also add to people's reluctance to write to each other more than they do.

Which is a shame. How many people, children in particular, feel the same rush when they hear 'You've got post!' as they do when they hear the plop of an enveloped birthday card on the mat?

Few of us will have noticed a decline in the actual number of pieces of mail we receive. In fact, in many countries, the previously government-owned postal services have been privatised and now often seem more concerned in winning contracts from other companies to send their mail in bulk. This has led rather to an increase in the volume of junk mail than in making the sending of letters more attractive to the private user.

Small post offices, particularly those in rural areas, are fast-disappearing and counter services at those that are left are being expanded from simple stamp-selling to banking to insurance-selling. Local post offices have even been known to sell kettles. The simple answer seems to be that the national post office companies are not overly concerned with the decline of traditional postal services.

Be Part of the Solution

Paulo Magalhães, a Portuguese man, was bothered by this: he liked to send and receive mail. Guessing that he was not alone in this, he came up with Postcrossing. As the name suggests, it is loosely-based on the BookCrossing site. The idea is very simple: registered users send each other postcards. That is all there is to it.

The Devil is in the Detail

It sounds simple, but there are rules. First, the proto-Postcrosser must register as a user, providing some details: country, region and city. When they have completed this part, a useful little map shows their location including their longitude and latitude.

Then a username, which will be visible to other users of the site, and password must be chosen. More information is needed, of course: a name and postal address are vital, as is a functioning email address1. There is also the option of indicating the user's gender, though they may choose not to reveal this. Finally, there is an opportunity to add a short user profile.

After logging on, the username is followed by a short summary of the number of postcards they have sent and received. Postcards which have been sent but not received are described as 'travelling'. There are also a number of links:

Before a Postcrosser is eligible to receive a postcard, they have to have sent one. Therefore, the first thing to do after registering is to click the 'I want to send a postcard' link. After checking a box indicating the understanding of and agreement to the rules, the 'Request address' button should be clicked. The next stage shows a flattened world map, showing where the postcard will go. After that, an email will be sent revealing the username, name and address of the recipient, plus a unique postcard ID. This is a six-digit code: two letters represent the sender's country and are followed by four numbers. It is important to make sure that this code is shown clearly on the postcard because it is how the card is tracked.

When the postcard arrives at its destination, the recipient logs on to the Postcrossing website, clicks the 'I received a postcard from another user' link and enters the unique ID code. They also have the opportunity of leaving a thank-you message for the sender. The website is updated and, more importantly for the sender, their name then goes to the top of the list of those waiting to receive a card.

If a card is not registered as received within 60 days, the postcard is timed out and will be removed from the list of 'travelling' cards. If it arrives after this time, though, it can still be registered (see 'Statistics' below).

The system works as a chain: as long as people send cards, other people will receive them. Names are released in rotation: once a postcard has been logged as received, the sender's name will eventually rise to the top of the recipients list. Another interesting aspect of Postcrossing is that you will not receive the address of a Postcrosser from the country where you are registered.

Some people do not restrict themselves to postcards and some include a return address, which has lead to exchanges of postcards outside of the 'official' system.

But Is it Safe?

The Postcrossing website promises not to release addresses to anyone other than the user requesting an address. In addition, it is not possible to request more than five addresses at one time: if a user has five cards travelling, they are not able to request a new address until one of them has been registered as received. This is to prevent unscrupulous people downloading the entire database.

Common sense should be applied. If a user is under the age of majority in their country, they should not give any personal details over the internet without the express permission of a parent or guardian. If they are an adult, they should be aware of the potential dangers: the Postcrossing site has a very clear disclaimer that they do not accept any responsibility for the activities of users.

And Now the Statistics

The website statistics are updated hourly. At the time of writing, there were 15,874 registered users in 154 countries and 97,942 postcards had been sent and received. The slowest postcard took 259 days to be registered, while the average postcard trip time is 15 days. The top five countries, in terms of numbers of postcards sent, are: the USA, Finland, Germany, Portugal and the Netherlands.

But What Does it Cost?

The website is free to join. The only costs involved are those involved in buying postcards and stamps. Pedants would add to that the cost of ink, ISP fee, the cost of the electricity to power the user's computer, etc.

1At time of writing, Hotmail is treating all messages from the Postcrossing site as spam, so it will be necessary to use another address.