The Climate of South-central Pennsylvania, USA Content from the guide to life, the universe and everything 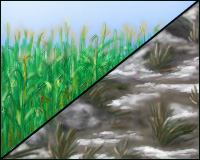 The climate of south-central Pennsylvania is officially classified as 'humid continental'. What this means is that there are four distinct seasons - too hot, too cold, very nice, and quite pleasant.

Summer can be very warm and humid. On average, expect there to be 24 days in the summer with temperatures above 90 degrees Fahrenheit. Thunderstorms usually are the only relief from the high temperatures and during the interval between storms, the relative humidity can become quite high. (Imagine living inside the mouth of a dog and you'll get the picture.)

Part of the reason for the heat and humidity is a phenomenon called the Bermuda High which is an area of high pressure over the ocean to the southeast of the region. The clockwise winds around the high pressure pump hot, humid air north from the Deep South, creating sweltering conditions that you would normally expect to find in Mississippi.

With these conditions in place, when a cold front from Canada descends over the region, the difference in temperatures can create some severe thunderstorms. In fact, during the late summer, a thunderstorm occurs every week or two.

As John Updike once wrote:

The sky is cloudless yet colourless, hovering blanched humidity, in the way of these Pennsylvania summers, good for nothing but to make green things grow.

The coldest temperature ever recorded as -22°F on 21 January, 1994. That occurred during a real cold snap that also included the coldest day on 19 January when the high temperature failed to get above 0°F.

In addition to the cold, there's the ever-present possibility of snow. Average snowfalls in December, January, February and March are 6.9 inches, 9.8 inches, 10.8 inches, and 5.5 inches respectively. During these four months the bulk of the snow falls, but it's not unusual to have snow in October, November and April as well. The earliest snowfall ever recorded was on 19 October, 1940.

The biggest snowstorm in a 24-hour period occurred on the night of 11 February, 1983, when 25 inches accumulated. This was the result of a coastal storm known as a Nor'easter. These storms are named for their sustained winds which come out of the northeast. They generally come up the Atlantic coast from the Gulf of Mexico bringing warm, moist air and a low pressure system. When this wet air mass collides with the cold winter air over south-central Pennsylvania, it produces a winter storm which can develop into blizzard conditions.

Local folklore also suggests that severe wintry weather will also occur during the week of the Pennsylvania State Farm Show. And even though statistically this isn't the case, it really does seem that the weather is worse during that week. Lifetime residents will also tell you that it never snows on Christmas Day, however, statistically there is a 21% chance of having a white Christmas each year.

Very Nice and Quite Pleasant...

With such extremes between summer and winter, it's no surprise that most residents of south-central Pennsylvania live for spring and autumn when the weather is at its most pleasant. Spring tends to be a bit more wet than autumn, but both are a welcome relief after the heat and the cold.

By mid-March the first daffodils are usually in bloom. And by late-October, the autumn leaves reach their fiery peak. The growing season in south-central Pennsylvania lasts about 180 days.

But south-central Pennsylvania has had its share of extreme weather as well - most notably floods and blizzards. Most of these extreme weather events caused tremendous damage to property and even killed people.

Most of the blizzard conditions experienced in south-central Pennsylvania are caused by a Nor'easter which forms under 'ideal' conditions. These storms come up the coast from the south, encounter very cold air and deposit the snow in feet.

Of the three biggest floods in south-central Pennsylvania, two occurred during the winter when ice jams on the Susquehanna River created dams which caused the water to back up behind them. The worst flood on record however was due to a tropical storm which lingered over the area for days.