Tim Curry - Actor Content from the guide to life, the universe and everything 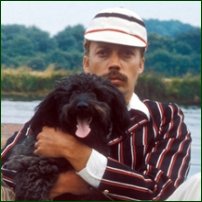 There are some actors who believe that they can portray all the necessary emotion in a scene with just a stare and a twitch of the eyebrows, and then there are the ham actors. These are people who will never knowingly underplay a scene, and after every day of work have to visit the dentist to get the chewed-up scenery removed from their teeth. Most ham actors do not have much success beyond the odd pantomime; some1 are showered with praise and awards; others, like Tim Curry, get to portray a seemingly endless array of quirky villains.

Of course, it would be unfair to just label Curry as a ham actor. His career has seen him win many award nominations for his stage work, produce a series of acclaimed albums and compile a large portfolio of voice-over work.

Life Before the Corset

Tim Curry was born in the Cheshire village of Grapenhall on 19 April, 1946. His father was a Naval Chaplain who was stationed there for another six months before he moved his family to Hong Kong. The family had been used to travelling around; his parents met in Malta and got married in Egypt. This was where his sister was born. Tim himself was conceived in South Africa. The family returned to England in 1948 and settled in Plymouth. After junior school, Tim went to boarding schools in Bath and Kingswood. Tim's father died when Tim was only 12, and his family moved to London.

As he moved around a lot, Curry developed the skills to entertain a crowd. At Kingswood, he met Jonathan Lynn who influenced him to become an actor. He also was an able choir soprano until his voice dropped, when he developed a more adult contemporary style that he would draw on in his later life.

After leaving school he spent a year travelling before 'attending' Birmingham University to study English. He spent most of his time acting with the drama society, but managed to pass his degree eventually.

Without having an Equity Card2 or having London stage experience he managed to blag his way into the chorus for the show Hair. It was here that he met a certain Mr Richard O'Brien.

Curry joined up to work with O'Brien on the latter's musical stage show, a tribute to 1950s B-movies that went by the name of The Rocky Horror Show. He took the role of the alien Professor Frank N Furter and made it his own. After starring on the London stage he took the lead role in the Los Angeles and Broadway runs of the show. When a film was being made, he was given the role. The tapping foot of the corseted mad scientist as he descended in an elevator in The Rocky Horror Picture Show was the first big-screen glimpse of Tim Curry3 and is one of the most iconic moments in cinema history.

During the 1970s and 1980s Tim Curry put his voice to good use and released a series of critically-acclaimed albums. These are mostly full of cover versions but included a few originals. He took his music on tour across Britain and the United States. He stopped his recording career in 1981 claiming 'I was too old and too literate'. A&M released a Best of Tim Curry in 1989.

An Actor's Life for Me

Since getting his break, Curry has worked fairly consistently in television, film and theatre. He describes the roles that he took on as characters that either 'knew too little or knew too much'.

He made an early appearance as author Jerome K Jerome in a 1975 BBC adaptation of Three Men in a Boat alongside Stephen Moore and Michael Palin. Some of his favourite roles were as the elocutionist in Oscar and as Long John Silver in Muppet Treasure Island4.

Film students wanting to study 'scenery-chewing' villains should watch his portrayals of Long John Silver, Herkermer Homolka5 in Congo, Pennywise the clown in It, William Shatner's girl-guide-uniform-wearing sidekick in National Lampoon's Loaded Weapon and Farley Claymore in The Shadow. Topping all of these is his especially evil Cardinal Richelieu in Disney's The Three Musketeers. He also produced a truly over-the-top performance as Wadsworth the butler, leading the cast around in the murder comedy Clue, directed by his old friend Jonathan Lynn.

Not all his roles have been over the top; he was rather subdued but still watchable as the Doctor in The Hunt For Red October.

They Say the Neon Lights are Bright on Broadway

Having an exuberant persona and a good singing voice, Tim Curry is perfectly suited for stage musicals. As well as The Rocky Horror Show, he has been in the cast of a number of other musicals, generally about one show per decade. He appeared as the Pirate King in The Pirates of Penzance in the 1979 London production. His three shows on Broadway each led to him being nominated for Tony Awards for Best Actor in a Musical. He played the title character in Amadeus in 1981, Alan Swann in 1993's My Favourite Year and King Arthur in the 2005 production of Spamalot, The Monty Python musical. He also opened the London production in 2006.

Life on the Small Screen

Curry's small screen appearances are slightly more limited. He has guest-starred in various shows from Lexx to Saturday Night Live. He played the recurring character Gaal, a mysterious human with dubious motives, in the short-lived sci-fi series Earth 2.

It may be said that Curry's voice makes more appearances in various media productions than his face. His resonant tones mean he is often called upon for voice-over work in films, cartoons and video games. One notable role is that of Nigel Thornberry in The Wild Thornberries. His playing of Forté in Beauty and the Beast: The Enchanted Christmas won him an Annie Award Nomination.

Tim Curry is a versatile and highly recognisable performer who has much more in his back catalogue than just a corset and fishnets. Most of his performances have been memorable, even if some of the films they were made in weren't.

1Some people might include Jim Carrey or Meryl Streep in this category.2Denoting membership of the Actor's guild. Having one proves that you are an actor, rather than somebody pretending be an actor, though you would might argue that the latter is the epitome of acting.3Okay, so he apparently played the priest at the beginning as well, but let's not let facts get in the way here!4On account of his leading lady, Miss Piggy!5He won a Razzie nomination for this.