The Ultimate Blue Sky Studios Animated Film Guide: 2002-2009 Content from the guide to life, the universe and everything 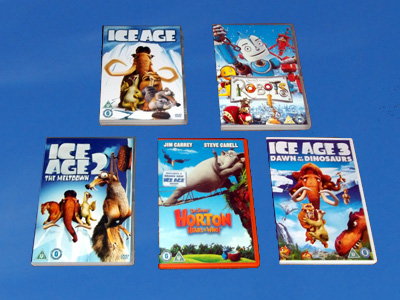 Blue Sky Studios is a computer animation company owned by 20th Century Fox that has created one of the most successful computer-animated film franchises of all time. To date its films can be divided into two: films in the hugely successful Ice Age series and Blue Sky Studios' other work, including the two films in the Rio series. Blue Sky makes its films on a much smaller budget than rivals Disney, Pixar and DreamWorks, yet this has not affected their films' quality, popularity or success.

In 1997 20th Century Fox acquired a stake in the company, hoping to use it as their effects department. Desperate to originate their own work, in their spare time the Blue Sky team made a short film called Bunny about a cantankerous rabbit trying to cook in her kitchen, only to be bothered by an annoying moth. It won the 1998 Academy Award for Best Animated Short Film. Following this success, 20th Century Fox bought the remainder of Blue Sky Studios in 1999. Fox had ambitious plans hoping to rival Disney's success, although their own animation studio, Fox Animation Studios, made only two films3 and allowed Blue Sky to make their first full-length animated film, Ice Age.

Ice Age was only the ninth American computer animated film4. With a plot in which a varied group of prehistoric animals undertake a journey together, the story shares similarities with the Don Bluth-directed The Land Before Time (1988) and Disney's Dinosaur released a year earlier, only with beasts rather than dinosaurs, with an added emphasis on comedy. Don Bluth had in fact been strongly considered to direct Ice Age until he refused due to his dislike of CGI.

Originally the plan had been to make a dramatic adventure. When the decision was made to change the tone to a comedy, it was realised that although humorous lines could be added to the script, there was nothing funny about the story of a baby separated from his parents. The character of Scrat was able to introduce some humour. Originally Scrat was a minor character who appeared only in an introduction sequence, added when the film was nearing completion, to ensure the first scene of the film featured the power and majesty of the ice. As Scrat proved popular with test audiences, his role was greatly expanded.

Hugely successful, at time of release it was briefly the second-most successful computer-animated film so far behind Toy Story 2, although it was overtaken by Shrek. Despite this it was the most successful animated film of 2001, beating Disney's Lilo & Stitch, Return to Never Land and Treasure Planet as well as DreamWorks Animation's Spirit: Stallion of the Cimarron. This demonstrated that Blue Sky could compete with more well-established studios. The film was nominated for the 2002 Academy Award for Best Animated Film, but lost to Hayao Miyazaki's masterpiece Spirited Away. This is the only Oscar-nominated full-length Blue Sky Studios film to date.

Robots is a fun film filled with ambition. Many of the scenes, sequences and scenery are breathtaking, and the voice cast, combining Ewan McGregor, Robin Williams in his first animated voice role since playing the Genie in Aladdin, Halle Berry and Sir Terry Wogan, is simply stellar. Having announced their presence with Ice Age, Blue Sky Studios made Robots cram-packed with details, jokes and cameos (including a robotic Sid from Ice Age) that repeat watching is certainly rewarded. Aimed at an older audience than Ice Age, it did not make as much money, yet it was still the third most successful animated film of the year following DreamWorks Animation's Madagascar and Disney's Chicken Little, ahead of Aardman's Wallace & Gromit: The Curse of the Were-Rabbit and Tim Burton's Corpse Bride.

Also called Ice Age 2: The Meltdown, this sequel made Ice Age into the third computer-animated film series after Toy Story and Shrek. At the time of writing the five films in the Ice Age series are the second most successful animated film series after the Shrek films. This film combines prehistoric creatures with the story of Noah's Ark, while many of the sequences featuring Scrat were based on ideas proposed for him in the first film. The film also features two surviving sea reptiles from the time of the dinosaurs, an ichthyosaur and a pliosaur, which would tie in with the next film in the series.

Technically the main characters are more lifelike than in the first film, with their fur being much more realistic. As characters, the recurrence of Manny, Diego and Sid also gel together more than in previous films and interact well with Ellie, the girl with the brain of an opossum and the body of a mammoth.

Based on the 1954 story by Dr Seuss and called both Dr Seuss' Horton Hears a Who! and simply Horton Hears a Who!, this is a charming tale which informs us that a person is a person, no matter how small5. This was the first computer-animated Dr Seuss story and it followed two live-action Seuss adaptations, The Grinch (2000) which also starred Jim Carrey and featured the Whos of Whoville, and The Cat in the Hat (2003).

This was the second Blue Sky film in a row starring Will Arnett as a vulture. A conscious decision was made to ensure that Horton the elephant was different to Manny the mammoth from the Ice Age series. This was accomplished by giving him a much more expressive mouth and ears that would fold into amusing shapes, as well as Horton occasionally walking on two legs.

There are frequent visual and spoken references to Dr Seuss' other books, especially Horton Hatches the Egg (1940). Another computer animated Dr Seuss story, The Lorax, was made in 2012, but this adaptation was by Illumination Entertainment rather than Blue Sky.

Overall Horton Hears a Who was another box office success and the fifth most successful animated film of the year, behind DreamWorks Animation's Kung Fu Panda and Madagascar: Escape 2 Africa, Pixar's WALL·E and Disney's Bolt.

Ice Age: Dawn of the Dinosaurs is another highly enjoyable chapter in the series, in which the characters are taken out of the Ice Age and out of their comfort zones, and so find their place in the herd. The film deals with how change impacts on a group of friends who despite not always getting on, nevertheless are willing to go through anything for each other. As Manny worries about becoming a father, Sid proves that he has what it takes to be a parent, echoing how it was caring for a young baby that brought them together in the first place. The film also contains lots of highly enjoyable dinosaur action in which their vast size makes even the mammoths seem small and Diego tame in comparison.

The third film in the Ice Age series was also the third Blue Sky film to top the most successful animated film of the year chart. It beat Pixar's Up, DreamWorks Animation's Monsters vs Aliens, Disney/ImageMovers Digital's A Christmas Carol, Disney's The Princess and the Frog, Sony Pictures Animation's Cloudy with a Chance of Meatballs and Laika's Coraline.

By the end of the decade Blue Sky had shown they were capable of beating established studios like Disney, Pixar and DreamWorks Animation at the box office. Yet looking ahead in an increasingly competitive market, their biggest challenge was to make another film that could rival the success of Ice Age and prove they were not a one-hit wonder.