The Great Disappointment of 1844: Millerites and Fake News Content from the guide to life, the universe and everything 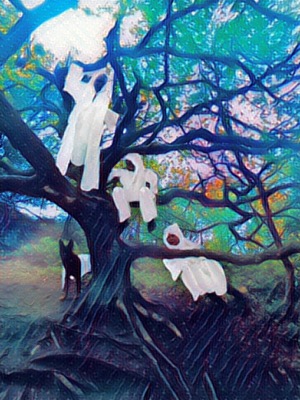 23 October, 1844 was not your typical Fall (Autumn) day. Or rather, it was – and that was the problem. For thousands of people in New England, that day's sunrise was a traumatic event. The dawn of 23 October, 1844 was the beginning of what was known as The Great Disappointment.

On that morning, people who had spent the night sitting on roofs or in trees, wearing homemade white robes, climbed wearily down to a reality they never thought they'd have to face again. There was weeping and gnashing of teeth. No wonder so many of them ended up in the 'Insane Assylum'. William Miller's prophecy of the End of the World had failed. No angels had arrived. No tractor beam had taken them to heaven. The Millerites had problems: many of them had given away all their possessions. What were they going to do now?

The Millerite movement of the 1840s was not a unique human phenomenon. People had (erroneously) prophesied the End of the World before, and they've done it since. But William Miller's preaching had such a horrendous effect on many people, especially in New England, that they were still talking about it nearly a century later. These people were victims of fake religious news. It might be worth taking a look.

Who Were the Millerites?

Very many persons believe that the deplorable delusion of Millerism is confined to persons in the humblest walks of life – to the ignorant and utterly uninstructed. This is a great mistake. There are to be found the followers of Miller persons from almost every rank of society; from the educated professional man, to the unlettered day laborer; and of women attached to the doctrines of the pretended prophet might be selected many whose presence would grace a fashionable drawing-room, and numbers who, as wives and mothers, are exemplary in every particular of womanly duty.
- The Radical [Bowling Green, Missouri], 16 November, 1844, Vol.4, No.2, p.3, c.2.

It all started with William Miller of Vermont. Miller, a veteran of the War of 1812, was a well-read farmer and Baptist preacher. Around 1833, he became convinced through his study of ancient Biblical texts that he knew exactly when the world would end. He started telling people about it – first in local churches and meeting-houses, and then farther afield, in the big city of Boston. The Boston appearances started a buzz. You know how it goes: other people became interested, and some of them had organisational ability. Speaking engagements were arranged. Newspapers and pamphlets got published. Enthusiastic camp meetings2 took place. As the magic year of 1844 approached, excitement mounted.

It is useless to try to explain what William Miller thought he'd discovered in the Old Testament prophecies. The niceties of this kind of textual interpretation – which is a cottage industry in some parts of the theological landscape – would only make sense to a religious historian. Basically, Prophet Miller (as he was called) did the same thing Harold Camping did in the 21st Century: count the days in Daniel 12:11-12. The 'days' listed in that ancient esoteric text, along with the reference to a mysterious '70 weeks', have given rise to more mathematical mischief than the world's stock markets combined. People keep trying to use these numbers to figure out when the world will end. Miller thought he'd done it: The End should come sometime in 1843 or 1844. However, he wasn't sure just whose calendar to use – Christian, rabbinical, or another Jewish calendar called Karaite3 – or which auspicious day to pick. So the group kept celebrating 'End Days' for about two years. 22 October, 1844, however, was the latest possible date for the End of the World. It just had to come then.

A word in defence of William Miller: he didn't intend for people to climb trees dressed in 'ascension robes'. His followers invented all that. Miller just wanted people to repent, pray, and get ready for the Second Coming, which was a pretty mainstream idea, if you ignored the part about guessing the date. Guessing the date is frowned upon by evangelical Christians, because Jesus specifically told his followers not to do this:

But of that day and hour knoweth no man, no, not the angels of heaven, but my Father only.
- Matthew 24:36 Authorised Version

Most Bible readers assume that if Jesus didn't know when the world would end, it would be presumptuous to speculate – a sensible attitude that saves a lot of grief all around. But Miller made the mistake of sharing his speculations. The resulting furore became widespread. Further away – as far west as Missouri, even in foreign parts, such as Chile, Tasmania, and the Sandwich Islands4, people were getting ready for the apocalypse. Millerite preachers even tried to enlighten the Mormons in Nauvoo, Illinois5, but the Latterday Saints were more than ready for them. They had their own prophecy, and weren't interested in another. Mormon leaders patiently picked holes in the divergent theory. But people who didn't have teachings of their own were far more open to the new idea. Millerism was all the rage in some quarters.

William Miller may only have wanted people to become more religious, but his followers soon developed their own theology. According to most of the Millerites, those who didn't join them in donning white 'ascension robes' and waiting on hills, in trees, or on rooftops for the Second Coming were very likely to get left behind in the Rapture. This would be terrible, because after the believers left, Earth was going to be destroyed6. Millerites were terribly worried about this.

Mr Peabody tried to reassure him, and said plainly that he did not feel that they must of necessity come to such a direful end, but he found it impossible to pacify him. Having a good deal of curiosity to know what plans the poor man had made toward meeting the fateful cataclysm, the latter assured him that as far as he and his wife were concerned everything was ready – their white robes were waiting to be put on, and they intended to go up on to the roof of the house and from there await the end. Here he quoted as a justification of this decision, 'He that is upon the house-tops, let him not come down7,' which he considered an intimation that the roof was where they'd best be.

Seeing that his listener was not convinced, he left the house sorrowfully deploring the approaching doom of this good gentleman and that of his family.
- CE Sears, Days of Delusion: A Strange Bit of History, Houghton Mifflin, 1924, p.176.

The New Englanders caught up in this strange apocalyptic frenzy weren't normally like this. They were, for the most part, hard-working, frugal, kindly friends and neighbours. When faced with the prospect of sidereal upheaval, they reacted with what foresight they could. And given the state of the skies in the 1830s and 1840s, you couldn't really blame them.

These Are the Days of Miracles and Wonders

In those days of minimal light pollution, more people watched the skies. And what they saw alarmed them. As early as 1780, when a forest fire in Canada caused an apocalyptic scare in New England, weather and astronomy played a role in public End-of-the-World scenarios. 1816, the 'year without a summer', caused even Lord Byron to write an apocalyptic poem. The meteor shower of 13 November, 1833 was so massive that many illiterate people dated events around it for the next half-century. 1833 was the year that William Miller first became convinced that he was 'living in the Last Days'. No wonder.

As the world has survived the day last appointed for its destruction by the Millerites, we hope that they will hereafter be content to let it move on without any further attempt to arrest its progress...
- Piscataquis Farmer, Dover, Maine, 8 November, 1844.

The failure of the world to end had serious consequences for many Millerites. Some, their nervous systems already stretched to the breaking point by apocalyptic excitement, snapped. One young Massachusetts farmer went to heroic lengths to find his Disappointed fiancée among the hysterical throng. He took her home, married her, and gradually nursed her back to mental health. Others were not so lucky: they ended up in asylums, or wandering about like poor Ben Whitcomb of Stow, Massachusetts. From the time of the Great Disappointment, Ben was known to be 'religious-mad': he often terrified villagers by riding his horse at a furious pace while wearing a strange sort of superhero costume he'd designed himself, complete with flowing red cape. Things got even worse when he dug up his late brother's skull as an accessory8.

Even if Millerites still had their wits about them, many had lost property in the pre-apocalyptic giveaway. At least one couple discovered that family members could be treacherous: their son refused to give back the farm. Mr Peabody, the gentleman quoted above, made sure these kind-hearted but confused people didn't starve. Most neighbours were understanding, and gave back land, houses, furniture, money and farm animals. Gradually, life went back to almost normal.

The Great Disappointment must have left scars, though. In 1908, Millerite survivor Jane Marsh Parker wrote about her experiences as a six-year-old9:

'Going to Meeting' as much as we children did that summer (and oh! – so many fast days!) was wonderfully relieved by the rowdy scoffers who occasionally diversified the long sermons by noisy interruptions, when the police would arrive – always an impressive episode for us! Then sometimes a woman would fall into a trance and see strange things, or Brother Somebody would speak with tongues and have to be sung down! That we always enjoyed immensely. Or we had baptism by immersion in the river, when the great crowd upon the banks would sing10...

We can't draw any real conclusions from William Miller's researches, other than 'the world failed to end in 1844, in spite of his prophecy.' However, the Millerites could teach us a few things.

1This probably refers to the New York State Lunatic Asylum in Utica, New York, founded 1843.2Camp meetings were large al fresco gatherings, not unlike rock concerts. Many were at least as raucous as Woodstock.3Fortunately, Rev Miller hadn't heard of the Phantom Time Hypothesis. It might have got even worse.4Hawaii.5The Mormon movement was centered in Nauvoo at this time. The city was huge, by frontier standards, numbering about 12,000 at its height. The assassination of their leader (and presidential candidate) Joseph Smith in 1844, and continued violence against the group, led to the trek westward which culminated in the settlement of Utah.6Do not, at this point, even think the words 'hyperspace bypass'. Just don't.7This quote is found in all three synoptic gospels. It's a shame that New Englanders, who had very slanty roofs (the better to shed rain and snow), were not aware that in the Middle East, roofs tended to be flat, and were often used for sleeping in warm weather. Such knowledge might have saved them a very uncomfortable night.8This story, and many other fascinating tales, can be found online in Days of Delusion: A Strange Bit of History, by CE Sears.9The Outlook, 18 May, 1908, quoted extensively in CE Sears, Days of Delusion: A Strange Bit of History.10CE Sears, Days of Delusion: A Strange Bit of History, Houghton Mifflin, 1924, pp.135-136.