Cheddar Cheese Content from the guide to life, the universe and everything 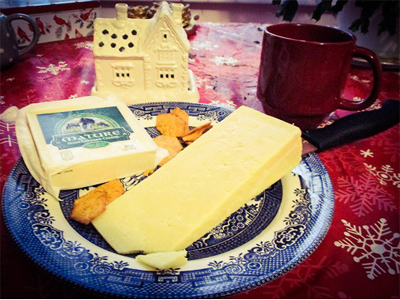 The popularity of Cheddar cheese is here expressed by Michael Palin and John Cleese1. Though Cheddar was indeed sparse in the cheese shop, Cheddar remains the most widely-purchased and eaten cheese in the world. It's undoubtedly great stuff. But how did it happen?

Originally made in England, Cheddar takes its name from Cheddar Gorge in Somerset. However, today Cheddar cheeses are manufactured throughout the world. The name is not protected, which has allowed it to be used (and abused) by producers worldwide. According to local legend, creation of the original bit of Cheddar was a happy accident, following the abandonment of a pail of milk (for safety, apparently - there must have been rampant milk-thieves stalking Somerset in those days) in the Cheddar Gorge caves. The milkmaid later returned to find that the milk had been transformed into something else. God only knows what possessed her to eat it. The distinctive flavour of the cheese is said to owe a great deal to the grazing provided by the rich pastures of the Somerset levels. The Cheddar caves, consistently at a temperature of 7°C, were an ideal place to store the cheese in - until a load of rats came along and spoiled the whole show.

Whether the milkmaid tale is a load of old pretendy or no, there is no doubt that cheese making was already well-established by the 12th Century - coagulant-loving Henry II declared Cheddar cheese to be the best in Britain and 10,240 lb (4,645kg) of the treasured substance (at a farthing per pound) figures in the king's accounts (the Pipe Roll) in 1170. This is before pizzas or sandwiches were officially invented. He shared the joy with his son, Prince John, who is on record as having bought a load of the stuff in 1184. At the time of the unfortunate Charles I, the parliamentary records show a huge demand for Cheddar - it was sold to the court before it was made, and was only available there.

Queen Victoria was once presented with a drum of lovely Cheddar that weighed 11cwt (558kg), formed from the milk of over 700 cows.

In 1901, the village of Cheddar was chosen to despatch an order of 3500lb (1588kg) of cheese to Captain Scott aboard the ship Discovery, for his famous Antarctic Expedition.

History shows that the present site of The Cheddar Gorge Cheese Company has been used for many years for the production of cheese. Once redeveloped, the site was opened by The Wurzels (a sort of Radiohead for the 1970s), and visited by HRH the Duke of Edinburgh (the one that isn't the Queen).

What Makes it So Tasty Then?

The goodness of the cheese is preferred, without all dispute, it is the best cheese that England affords, if not, that the whole world affords.
- Daniel Defoe, 'A Tour of the Whole of Great Britain' Vol 1, 1724.

Cheddar is made from cows' milk and, when fully-cured, is a semi-hard, natural cheese2, with a slightly crumbly texture. If it's not fully-matured, the texture is smooth. The longer it matures, the sharper it tastes and it's usually matured between nine and 24 months. It is shaped like a drum, 15 inches in diameter, with natural rind bound in cloth. The natural colour of Cheddar ranges from white to pale yellow; the yellowy-orange stuff you see in the supermarket has a colour added to it.

The milk is heated to 16°C (86°F) and inoculated with a lactic starter culture. Rennet is added an hour later, and when the curd is firm, it's ground down to marble-sized bits which are then heated to 23.5°C (100°F). The whey is discarded, and what's left is sliced into slabs. The curd, pressed overnight, is then stored in a cool atmosphere for four days.

1Cleese's family name was actually Cheese, until his grandfather changed it prior to the First World War.2'Hard Cheddar' is a jokey development of 'hard cheese,' which dates back to at least 1876 in the UK - this is ironic, since Cheddar is merely a semi-hard cheese.