Scrumpy Content from the guide to life, the universe and everything 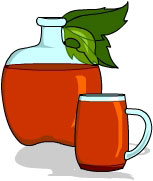 Scrumpy is the name often given to traditional cider made mainly in the South and West of England. Its true heartland lies in a band through Devon, Somerset, Gloucestershire and Herefordshire, though it may also be found in Kent, Sussex and East Anglia.

The name is derived from the obsolete dialect word scrimp, meaning a withered apple. From this we also get the verb scrump, long used to mean stealing somebody else's apples, but originally referring to the custom of collecting windfalls.

Scrumpy differs from the 90 million gallons of cider produced yearly by Britain's large commercial cider producers in a number of ways. It is fermented naturally from whole apples rather than apple juice, contains no added sugar or water (or corn syrup), is unpasteurised and, most noticeably, is not carbonated. Scrumpy sold commercially is typically between 6% and 9% ABV, but the drink can reach as much as 15%.

Apples were first grown in Britain by Iron Age Celts, with the Romans later introducing improved varieties, though we do not know whether cider was produced at this time. Cider making was certainly going on around the Mediterranean in the 1st Century AD. It was well established in Brittany and Normandy by the 8th Century, and it was possibly the Normans who brought it to Britain. The first record of production dates from 1205. By the 17th Century it had not only become hugely popular, but was championed as the equal of the best French wines.

A cider allowance of 3-4 pints (rising to 8 at haymaking time) was often considered part of a farm worker's wage, and most farms produced cider from their own orchards. This practice was outlawed in 1887, leading to a decline in consumption that was bolstered by the population drift to the towns.

In post World War Two Britain, government policies led to the widespread grubbing-out of orchards, and traditional cider making nearly died out, giving way to mass-production. However, a few small producers survived against the odds. During the 1980s, a noticeable revival began, with many new producers being established and the long-time survivors beginning to thrive once more.

The apples used are usually, but not always, traditional cider varieties such as Dabinett, Kingston Black, Tom Putts, or Tremletts Bitter. These are characterised by high tannin levels, which contribute bite and body to the product, but may be sweet or acid. They are usually harvested in the autumn or early winter, often when already fallen, hence the picturesque term 'windfall wine', used by some of its fondest admirers. It is vital that any bad apples are removed before milling, as the presence of certain bacteria and fungi can destroy the taste and odour of the cider.

Cider apples usually have a fibrous texture that makes them easier to press than dessert apples, but still require crushing or milling in order to enable extraction of the juice. Historically a horse was used to draw a stone wheel around a circular stone trough, but any number of ingenious methods have been developed, ranging from scratcher mills (effectively a high-speed rotating grater) or garden wood-shredders to domestic mangles studded with stainless steel screws. The resulting pulp is, of course, much the same and is known as a pomace.

To extract the juice, the pomace is formed into a cheese. Originally this was built from alternate layers of pulp and straw, the latter forming the drainage channels. Today it is normally formed by wrapping the pomace in Terylene cloths, although at least one well-known producer continued to use the straw method into the late 1990s. The cheese packages are then layered into the press, separated by wooden boards. Wooden screw presses have been used since medieval times, and some makers still use hand-powered machines, but most now use electric or hydraulic presses. The principle is the same.

The juice is collected as it runs off, and usually passes immediately to fermentation vessels: traditionally large wooden vats or casks. It is unnecessary to add cultured yeast (as large cider makers and some 'craft' producers do) as the wild yeast present is entirely adequate. The process takes several weeks, ideally in cool conditions.

Once fermented, the cider may be 'racked' and siphoned separating it from the spent yeast. Nowadays, even some traditional cider makers filter their product to remove the suspended matter that can give scrumpy its once-characteristic cloudiness, whilst others pride themselves on producing a clear cider without recourse to such intervention. Traditional containers for cider are wooden casks or earthenware jars. Note, however, that it is not wise to allow cider into contact with any but the most inert metal! Scrumpy will mature for over a year, but may be drunk sooner.

How and Where to Drink Scrumpy

Beer on cider makes a good rider,
Cider on beer will make you feel queer1

Do not disregard this saying as an old wives tale! Whatever the chemical or physiological reason, it is sound advice, and those who ignore it soon learn the error of their ways, often messily. In fact, one should always take care when drinking scrumpy; although it is usually very quaffable, it may be twice the strength of a beer. Drinkers often fail to register their inebriation until they try to stand up and discover that their legs no longer serve any useful function.

Scrumpy is, of course, served in a fair number of pubs throughout the Westcountry and beyond, but finding these nowadays may be difficult. Try pubs away from the busier tourist areas, or look for pubs that have a good reputation for real ales. Be careful that you are being offered a 'local' cider - certain tied houses serve only brands approved by the brewery, so it is not uncommon to find nationally-marketed Addlestones from East Anglia in a Devonshire pub. Ironically, you will probably find that the cheaper the cider, the higher its quality is likely to be.

A mecca for those seeking the finest scrumpy must be The Olde Cider Bar in Newton Abbot, Devon. This literal 'pub with no beer' serves a wide variety of ciders from the wood in surroundings that give the impression of having remained unchanged for centuries. Do not try to ask for a pint of lager, don't expect food or piped music, and remember that the landlord will know better than you exactly how much your body is capable of withstanding.

There can be little doubt that the best way to drink cider is in the open air. Select a pleasant, sunny hillside on a late afternoon in the summer, eat bread and local cheese, sup your drink and enjoy watching the view slowly dissolve.

Finding a genuine scrumpy may be difficult, and finding ones that are to you individual taste may be harder still. There is as much variation in traditional cider as there is in, say, white wine. Obviously, it's all a matter of taste and there are many producers, so the following is merely general advice.

Avoid at all costs a well-known national brand whose name actually includes the word, it bears no resemblance whatsoever to the real thing. Addlestones, a brand of the commercial cider producers Matthew Clark, is a brave attempt to market a 'traditional' still cider, but it is somewhat insipid and characterless.

Also best avoided are 'grockle' ciders aimed at tourists. These can often be identified by silly names, but this is not a hard-and-fast rule as some better ciders also use this marketing ploy, for instance Whitestone Farm's 'Old Pig Squeal'. A better rule of thumb is not to buy cider from shops which sell clotted cream fudge and peppermint rock.

There are two major cidermakers whose products are now widely available, Westons of Much Marcle, and Thatchers (Somerset). They each produce a full range including single-variety ciders2, which may be found in pubs and supermarkets nationwide, and are generally very enjoyable. Beware, however, anything branded with the name 'Inch's'. This much-loved and respected Devon company committed the ultimate sin of challenging the big boys at their own game, and was therefore taken over. The new owners not only closed Inch's down, but destroyed their equipment, preventing anyone continuing the business. They continue to use the brand name, but it is most definitely not the real McCoy. Despite all this, the traditions of Sam Inch's firm have been reborn in the Winkleigh Cider Company, whose product (cheekily sold under the name 'Sam's') is fast approaching the style of the original.

There are dozens of smaller, local cider making companies around the country, and their products are nearly all worth seeking out for their local character and individual style. These firms, such as Heron Valley, Luscombe, Sheppy's and Burrow Hill often supply a handful of pubs and shops in their own area, and arguably represent the most consistent high quality.

At the smallest-scale of the business is the farm-gate operation. Due to exemptions from the duties usually levied on liquor and from the normal licensing restrictions there are rather more of these than you might expect, but the challenge lies in actually finding them. Some sell their wares through a farm shop, others have less sophisticated arrangements. At the long-established Hunts of Yalberton you are invited to ring a bell alongside a side window of the farmhouse which will summon a member of the family to serve you - with any luck. The taste, strength and quality of farm scrumpy varies enormously; the warming high-tannin Hunts is produced only yards from the site where the almost-legendary Churchwards made their light summery easy-drinking cider until 1999.

There is one final group of producers who should be mentioned, the self-proclaimed 'craft cidermakers'. Often self-taught and rather snobbish about their hobby-business, their product is sometimes undrinkable. They tend to shun the word 'scrumpy', disliking its association with the yokel image popularised by The Wurzels.

The French have been making Calvados at least since the 16th Century, when production was legally restricted to Brittany and Normandy. In Britain the distillation of cider brandy had certainly caught on by the 1670s, and seems to have been widespread at one time. Unfortunately traditional British production seems to have later died out. In 1989, however, HM Customs and Excise issued the first ever full licence to distill cider to the Somerset Cider Brandy Company (sister company of Burrow Hill Cider) at Kingsbury Episcopi. Three-, five- and ten-year-old vintages are now available and have gained excellent reviews.

Quality cider-making is promoted by APPLE, part of the Campaign for Real Ale. There are also many enthusiasts' websites to be found too, and a good starting-point would be the comprehensive UKCider site. The more light-hearted The Scrumpy User Guide also comes recommended.

1In the old-fashioned sense of 'ill', of course.2 These bottled ciders tend to be lightly carbonated and are not, therefore, scrumpy. They are good quality, though, and make a fine second-best.