Anthony Comstock and the Death of Ida Craddock Content from the guide to life, the universe and everything 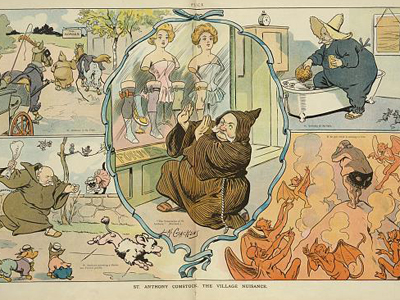 For Anthony Comstock, lust was the enemy. The enemy of Family, the enemy of Youth, the enemy of Purity. The New York Society for the Suppression of Vice had one aim – to stamp out this pervasive and debilitating evil once and for all, and to prevent the dissemination of pornography, dangerous ideas about 'Free Love', and birth control information.

George Bernard Shaw labelled these efforts 'comstockery', and said they gave America a bad name. In return, Comstock called Shaw an 'Irish smut peddler'. Victoria Woodhull, the first woman candidate for US President, flouted him, and was persecuted as a result1. Margaret Sanger fought the Comstock laws for the right of ordinary people to sex education, and was forced to leave the country.

A Special Agent of the US Postal Service, Comstock was entitled to bear arms in defence of decency, to carry a gun in order to protect the purity of the mails. He embodied rectitude and family values. In 1902, he drove a woman to suicide – not his first victim, nor his last. Before his own death, Comstock boasted of 15 suicides and 4000 arrests as a result of his work.

Ida Craddock, Quaker-born Theosophist, visionary, sexual advisor to young married Victorians, was the victim in this case. She could not stop Comstock from imposing his own idea of morality on the United States. Craddock chose her own way out, on her own terms, leaving but a tiny legacy to the world. Her ideas, such as they were, are to be found in a dim corner of the library, next to books about ouija boards and Bigfoot.

This is their story. It remains for the reader to judge which of the two was the enemy of lust - and which its fervent practitioner.

'A Weeder in God's Garden'2

A devout Congregationalist, Comstock fought in the American Civil War on the Union side. What aggrieved him most about this hellish conflict was the bad language used by other soldiers. Apparently, killing your fellow-countrymen was something that needed be done with a cleaner vocabulary. Returned from the war, he became a crusader against pornography in Manhattan, fertile ground for that sort of thing even then. This activity brought him to the attention of the Young Men's Christian Association. The YMCA recognised Comstock's genius and appointed him head of the New York Society for the Suppression of Vice.

Comstock's brilliance lay in his method of attack: rather than confront erotica head-on, thus raising freedom-of-speech issues, he used an 1864 law against the sending of obscene materials by mail. Employing a pseudonym, he would mail-order a naughty book, and another smut peddler would bite the dust. So successful was this sting strategy that Comstock was able to lobby for the 1873 laws, now called the Comstock laws, which gave obscenity hunters a much wider scope for their activities: in fact, federal marshals were now allowed to seize the otherwise sacrosanct US mails, and to destroy this dangerous material in the defence of their country's morals.

Comstock later estimated that he had pulped 160 tons of 'vicious' material in his career. Materials on the Society's hit list included, but were not limited to: the works of Theodore Dreiser, DH Lawrence, and George Bernard Shaw3, Victoria Woodhull's journalistic account of the Reverend Henry Ward Beecher's extramarital affair, anatomy textbooks, and Margaret Sanger's contraceptive pamphlets.

In the 1890s Comstock began a crusade against Ida Craddock, a sex therapist who wrote books of advice for married couples. His first prosecution in 1899 was directed against a work entitled Right Marital Living, which has been described as 'a sex manual for clumsy husbands'. As the outcome of the case was less successful than he'd hoped (the Chicago medical establishment backed Craddock and she didn't go to jail), he tried again a few years later.

The case of Ida Craddock's The Wedding Night would have dire consequences for Craddock, and tarnish Comstock's already questionable reputation - but not enough to stop him.

The impetus for the animus appears to have been Craddock's spirited defence of the appearance of 'Little Egypt' at the Chicago World's Fair in 1893. Craddock had publicly supported the belly-dancer, pointing out (as all the world now knows) that belly dancing is a kind of sex education often performed at weddings.

What was so shocking about The Wedding Night? The book opens chastely enough with the words:

Oh, crowning time of lovers' raptures veiled in mystic splendor, sanctified by priestly blessing and by the benediction of all who love the lovers! How shall we chant thy praise?

The answer lies in the fact that Ida Craddock advocated a practise known in tantric yoga as coitus reservatus. This technique, she felt, would enhance marital relations.

Tantric yoga is based on the idea that we are not merely physical bodies, but that we consist of energy fields. Tantric practices aim to optimise the interactions of those energy fields, and to minimise the merely physical. In short - Ida Craddock was saying that sex was a spiritual exercise. She was also saying that the purpose of sex was not necessarily to have babies.

As a Theosophist and practitioner of a foreign religion, Craddock was suspect. Her views were unconventional, to say the least. Her own family attempted to have her institutionalised, no doubt partly due to her insistence that she was married to an extraterrestrial entity known as Soph, and that aliens from another universe had, well, 'told her things'. If there had been a law against publishing books by people with unsatisfactory credentials in the sanity department, Craddock's printer would have been liable. But then, Madame Blavatsky and Rudolf Steiner would have had trouble finding an audience, as well.

Comstock said this book was obscene, and Comstock was an honourable man who was even known to object to the racier parts of the Bible5. If he said it was a dirty book, it was a dirty book. The jury had to take his word for it, after all.

They never got to read it.

'Even in Paradise I cannot be as happy as I might, unless you share with me this beautiful knowledge'6

The jury in New York City condemned Ida Craddock without even leaving their seats. She spent three months in the city workhouse under terrible conditions. As soon as she was released, she was re-arrested under federal law, and offered a chance to avoid further imprisonment by pleading insanity. This she refused to do.

On the morning of 16 October, 1902, Ida Craddock was scheduled to be sentenced. She was forty-five years old, and she didn't think she could make it through the expected five years' imprisonment. She sat down and wrote two letters. One was addressed to the public at large, explaining in a rational and persuasive manner what she had written and why, and what Comstock had done to persecute her. She had this to say about the anti-vice crusader:

'... if the reading of impure books and the gazing upon impure pictures does debauch and corrupt and pervert the mind (and we know that it does), when we reflect that Anthony Comstock has himself read perhaps more obscene books, and has gazed upon perhaps more lewd pictures than has any other one man in the United States, what are we to think of the probable state of Mr Comstock's imagination today upon sexual matters?

Craddock had a request to make of the public she was leaving behind - that they not allow Right Marital Living to be banned along with The Wedding Night.

She wrote a second letter, to her mother, asking her forgiveness for leaving life prematurely. She told her mother whom to contact to find the money she was leaving her, and concluded by assuring her that '... the world beyond the grave... is far more real and substantial than is this world in which we to-day live.' Her friends the spirits had told her so.

Then Ida cut her wrists and put her head in the oven.

Anthony Comstock left a lasting impression on US society. Parts of his laws are still enforced today. Perhaps even more significantly, the elder statesman of legally binding purity had a strong influence on a young law student, one J Edgar Hoover. Comstock fought against 'smut', obscenity, pornography, and ideas he considered a threat to the stability of family life. We could, like the New York jury, take his word for it, or we could ask the question Ida Craddock asked: 'What are we to think of the probable state of Mr Comstock's imagination... upon sexual matters?'

Ida Craddock left us a couple of very odd books that only an occultist would consider even remotely intelligible. She left her mother forty dollars, and she left the world of reformers and activists something to get outraged about. Craddock committed the cardinal error that has always led to disaster – always, for everyone from the Cathars to Margaret Sanger. She advocated the idea that sex between humans has some purpose other than procreation.

What are we to make of her view of sexuality? Her books offer a frank discussion of body parts and their uses. She gives us advice, is humorous, often lyrical in a late-Victorian sort of way. Ida Craddock insists, however, that her view of sexuality is the spiritual one, not Anthony Comstock's, no matter what moral terms he uses to discuss his collection of racy cigarette cards.

Lust: concupiscent desire. Whose desire was lust – the moralist's or the tantrist's? In his campaign for chastity, did Anthony Comstock's desire to kill desire come full circle and turn into a different form of lust - the desire to kill?

1Comstock was not alone in finding Mrs Woodhull scandalous. Harper's Weekly famously lampooned her as an evil priestess of free love.2Self-description by Anthony Comstock.3An attempt to prevent the performance of Mrs Warren's Profession was unsuccessful.4Ida Craddock, The Wedding Night.5One suspects he would have approved of Olive Pell's version.6Ida Craddock, Suicide Note.