Malaysian Teapot Worship - The Ayah Pin Cult Content from the guide to life, the universe and everything 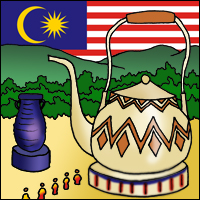 At 2:30pm on 1 August, 2005, Government bulldozers rumbled into a remote forest clearing in Terrengganu state, Malaysia, and demolished a number of 'non-agricultural' buildings which had been illegally erected. But this was no normal planning-law misdemeanour; a large police presence stood by to ensure no retaliation occurred, and the media were barred from witnessing the event. For this was a religious site and the offending structures included a large yellow umbrella, a representation of Noah's Ark, a giant blue vase and - the centrepiece - a two storey-high concrete teapot.

This was Sky Kingdom - a Disneyesque riot of colour among the trees and home to a commune led by an illiterate Malay man, Ariffin Mohamad. Known by the title Ayah Pin1, he preached a gospel of love and cross-religious understanding. The structures were foreseen in the dreams of Mohamad Ya, one of the cult's followers. The teapot symbolised the purity of water; God has a heavenly version with which he showers his blessings upon mankind. Followers came to Sky Kingdom from far and wide to drink holy water from the vase, which was perpetually filled by the teapot, and listen to the teachings of Ayah Pin.

Although the Malaysian constitution enshrines religious freedom, Ayah Pin's group was seen as a deviant sect which didn't conform to the Islamic faith of the region. Yet the manner in which the cult was persecuted has opened up a deep constitutional division between Malaysian federal and Islamic law.

Ayah Pin founded the commune in 1975, claiming himself to be the reincarnation of the god of Buddhism, Hinduism, Christianity and Islam:

I am the boss of all religions. When I was 10, the people from the Sky Kingdom came to me and gave me the power to save humanity irrespective of race or religion.

The cult had no specific teachings of its own; rather it allowed members to follow any religion of their choice, even catering for the beliefs of the indigenous Malaysian people, the Orang Asli. Ayah Pin answered all prayers as the one god.

It would be another 19 years before he and his followers started to build the unusual structures, their architecture combining elements from the four main religions. Funding was provided by devotees, of whom there were estimated to be several thousand. They reportedly included some local celebrities and several foreigners, especially from the United States and Australia. Some were drug addicts; some had mental health problems; others simply wanted their dreams explained. They came from far and wide to listen to Ayah Pin's advice and attend healing sessions in a round room beneath the teapot lid. According to one, a New Zealander:

Ayah Pin is the first spiritual leader who is making a strong effort to unite all religions.

The cult leader was described in The Independent in 2005:

As a divine presence, he seems rather louche. His fingers are stained yellow with nicotine, and he is wreathed in clove cigarette smoke when he can't get hold of his Salem menthols. Often, two teenage acolytes are on hand to fan him.

For many years, the authorities largely turned a blind eye to this peaceful cult, having a large number of deviant sects to keep an eye on, some of them violent. Yet it was clear that, as Ayah Pin's popularity grew, it wouldn't be long before they started to take notice. As the South China Morning Post put it:

Worshipping a giant teapot and claiming to be God in the unforgiving heartland of fundamentalist Islam is like waving a red banner at a bull.

In March, 1995, the Terengganu religious authorities charged four followers of Ayah Pin with spreading deviant religious teachings. In the following year they were ordered to attend monthly repentance sessions at their local Qadi's office2. The four were teapot visionary Mohamad Ya, his wife, Kamariah Ali, Mat Yaakub Ismail and Daud Mamat.

Having not repented, the four were re-arrested in October, 2000, and charged with ignoring the previous ruling. Three of them then caused a shock at their trial by revealing they had renounced Islam, having made a statutory declaration two years earlier, and claiming Islamic laws no longer applied to them. All four were fined and sentenced to three years in jail. They were spared being whipped on release, as women and men over the age of 50 were exempt from this. At a later appeal, they claimed the federal constitution provided for their freedom and absolute rights to embrace and practise the religion of their choice. However, this argument was dismissed.

Ayah Pin was then arrested, fined and jailed for 11 months in 2001 for sending a letter to the district religious officer stating he was no longer a Muslim.

A further appeal by the four was dismissed in 2002. The judge felt they were renouncing their religion only to avoid punishment. Yet they were granted leave to appeal to the federal court. By the time this was heard in November, 2003, the four had been released. But they were now the Teapot Three, Mohamad Ya having died the previous month3. The federal court ruling, delivered the following year, was that a person who had declared themselves an apostate4 could still be brought before Sharia5 courts for offences committed when they were a Muslim.

The jail sentences didn't deter Ayah Pin and the other 'teachers'. The Sky Kingdom commune continued to grow and its popularity spread, although devotees were now cautious of the authorities. A Sydney Morning Herald article in March 2005 stated:

Many cult followers do not publicly admit their association with Ayah Pin; in closely knit Malay societies doing so could lead to ostracism and humiliation. Many end up leading double lives, appearing to follow Malay Muslim ways among friends and colleagues, but shedding many of those pretensions at home. 'None of my friends at school know that my mother is a follower of Ayah Pin,' says 12-year-old Johan.

With international publicity like this, the authorities decided to act. In May, 2005, they demanded the commune tear down the structures, citing planning by-laws. In July, they raided Sky Kingdom during one of Ayah Pin's weekly prayer meetings. The arrests numbered 21, including a police inspector, a drummer in a local rock band, and one of Ayah Pin's wives6, yet Ayah Pin somehow evaded capture. From now on, he was to be public enemy number one.

A couple of weeks later, a group of around 50 people in masks and robes broke into the compound, throwing petrol bombs and damaging a number of the structures, including the umbrella and teapot. The following week, another official raid arrested 58 more followers, 49 of whom were charged with breaching the directive of the state mufti by joining the deviationist teaching group. Again, Ayah Pin managed to spirit himself away. His followers claim he was there each time but the authorities couldn't see him.

The end came a few days later when heavy machinery finally razed the commune to the ground.

The demolition of Sky Kingdom was reported across the world, including the Daily Telegraph, Irish Times, even the Tea & Coffee Trade Journal. Some treated it as a silly season story about teapot worshippers. Some covered the issues of human rights and freedom of religious expression, whereas others dealt with the wider problems of a nation operating parallel justice systems.

Many commentators were surprised this cult managed to survive as long as it did. In 1999, Malaysians had voted the conservative Islamic party PAS into power in Terengganu state. PAS had introduced the strictest form of Islamic law, hudud, which, among other things, punishes apostasy with beheading. However, only around 60 per cent of Malaysians are Muslims, and many liberals across Malaysian society are opposed to attempts by the authorities to enforce religious intolerance. A recent petition to the Government reads:

We question the state's role in defining and controlling the morality of its citizens and its use of punitive religious and municipal laws. Forced and fearful compliance with such laws results not in a more moral society but a mass of terrified, submissive and hypocritical subjects.

If the situation changes, it may come too late for Kamariah Ali, now the Teapot One, who was again charged with apostasy and placed under virtual house arrest. She has been shunned by her community, and found herself repeatedly in and out of court. Despite her appeals and documentary evidence that she'd renounced Islam, she was again jailed for two years in March 2008, although this is believed to be suspended pending further appeal.

Her main problem appears to be that she's Malay. The constitution defines a Malay as a person who 'professes the religion of Islam, habitually speaks the Malay language, and conforms to Malay customs'. By definition, therefore, she is Muslim and answerable to a Sharia court. She remains calm; as she said in an interview in 2005:

If we go back through history, even those who brought Islam, pioneers of religion all go through difficulties first. So I have to be patient.

To date, the authorities haven't tracked down the invisible Ayah Pin, now branded a threat to national security. He's believed to have fled to Thailand, although some say Australia.

Life goes on in Malaysia, which has been busy promoting itself as a top tourist magnet for Arabs. Indeed, in August, 2005, exactly one week after the destruction of Sky Kingdom, a new tourist attraction was unveiled in Kuala Lumpur. Ain Arabia is a landscaped 'mini-Arabia', complete with late-night shops, palm trees, waterfalls, women-only swimming pools and, pride of place, a fountain in the shape of, you guessed it, an outsized Arab-style teapot.

1Literally 'Father Pin'.2The local Islamic judge.3He was honoured by being buried in a special graveyard at Sky Kingdom.4One who had renounced their religion.5The Islamic law based on the teachings of the Koran and the traditions of Muhammad.6At the last count he was believed to have four wives and 20 children.