DC versus Marvel - A comparison of Comic Book Publishers Content from the guide to life, the universe and everything 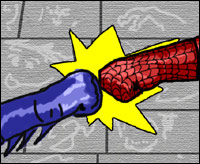 When people think comics, they often think of particular characters and superheroes - Superman, Batman and Spider-Man for example. However, behind many of the biggest characters are the behemoths of the comic book industry, DC Comics and Marvel Enterprises. The competition between them is legendary, which is odd because the rivalry is more a friendly acceptance of each other. The two companies have often collaborated on projects, sharing their best talent and often crossing ideas over: examples of this can be found with DC/Marvel Team Ups, Amalgam Comics, and the revelation that DC's Superman supporting character 'Mr. Mxyzptlk' and Marvel's 'Impossible Man' are one and the same. The bantering of Marvel competing with 'Brand X' while DC referred to its 'other leading brands' - much like soap powder producers - shows the casual atmosphere between the rivals. However, the two companies do have their differences.

A Brief History of DC

DC Comics began life back in 1935, from humble beginnings as National Periodical Publications and All-American Comics, both of which featured previously unpublished material and work from then unknown writers and artists. Merging a few years later, the lines became Detective Comics1 and was soon shortened to DC. In 1938, DC released Action Comics, featuring probably the most famous hero of all time, Superman - the man of steel from another planet who had the power to fly, run faster than a speeding train and was virtually indestructible. A new comic book age began, and indeed a new genre of fiction writing. With the success of Superman and Batman, DC went on to produce many other popular characters, such as Wonder Woman, the Flash, Green Lantern and the Teen Titans.

Through the 1940s, '50s and '60s, DC capitalised on the popularity of their creations with many radio and television spin-offs, most notably the outrageously camp Batman starring Adam West in the title role. During the 1970s the company touched on social issues more, with characters openly tackling issues such as racism, drug abuse, ecology and sexuality. Wonder Woman enjoyed stardom on the small screen in the form of Lynda Carter, and DC also delved into the horror genre with Swamp Thing (which also eventually spawned a film series). During the 1980s these issues were continued and DC, while still publishing their mainstays, realised that there was much to offer in comic books for adults (or as some like to call them, 'graphic novels') such as The Watchmen. The 1990s saw DC Comics branching out with their lines Vertigo, Milestone and WildStorm Comics. Vertigo have gone on to feature the amazingly popular Sandman, Hellblazer and Preacher; Milestone concentrates on multicultural characters; while WildStorm is a platform for unknown artists and writers to expose their craft. The reinvention of Superman and Batman during the 1980s and '90s also saw DC increase their fan base and capture new audiences. Into the 21st Century, DC Comics have a firm base both in the traditional comics and the adult genre.

A Brief History of Marvel

Anything and everything that Marvel is today could be attributed to writer Stan Lee. He created the company's most enduring characters, best titles and the overall style it holds onto today. However, there was more to Marvel before office gopher Stanley Leiber started making waves.

Marvel originated from an amalgamation of Timely and Atlas Comics, with Marvel Comics #1 published in 1938. Amongst its first stars were the Sub-Mariner, an aquatic anti-hero from Atlantis and the Human Torch, a young man who had the ability to control fire. But the struggling company needed a hero to rival the likes of DC's Superman, and when America entered the Second World War the team at Marvel saw their chance. 1941 saw the arrival of Captain America, a patriot and scientifically-engineered superhuman, was born to fight the Nazi threat - and with over a million copies of this new hero's series sold (more than Time Magazine), Marvel Comics were well on their way. But it wasn't to last, and with the close of the war comics stopped being sent to troops and the characters that had become so popular were no longer needed. Marvel attempted to resurrect itself with comics aimed at the teenage girl market and the growing interest in the American Wild West, but spent much of the late 1940s and '50s in the shadows.

In 1961 Stan Lee created The Fantastic Four: a team of heroes including a reinvented Human Torch, an invisible girl, an orange behemoth called 'The Thing', and their leader - a scientist-turned-rubber-man. This hitherto unseen style of comic scored a hit and in 1962 Spider-Man was introduced. In the next two years Marvel Comics bounced back with the creation of many of their mainstay characters; the Avengers, Iron Man, Thor, a reinvigorated Captain America, the Incredible Hulk, Daredevil, the Silver Surfer and the X-Men. Through the 1970s, Marvel pushed the boundaries of controversy with issues such as drug abuse2, while introducing extreme characters such as The Punisher. The Incredible Hulk, firstly a notoriously unpopular character, had a resurgence thanks to the television series starring Lou Ferrigno as the uncontrollable beast. The 1980s saw Marvel into the shadows again however, with changes to characters and unpopular script decisions pushing fans away. During the 1990s Marvel went back to the origins of their characters and developed the MAX series. Moving into the 21st Century, Marvel Enterprises is looking forward to increased popularity, with many of the creations bursting onto the big screen and popular internet-based 'dot comics'.

The main differences between DC and Marvel are stylistic. DC is evolutionary, constantly changing with the times to remain current and fresh. Marvel is revolutionary, occasionally stirring things up and doing something totally new, but maintaining its original concepts. DC can be compared to a major celebrity that will always be in the spotlight while Marvel a yoyo of brilliance, with huge blockbuster plots and tie-ins, then a drop back into obscurity. The difference in the publications also lies in the concepts of the characters, and this may be a reason why there has been a rise and fall in the popularity of each company's stalwart creations.

All superheroes have strengths and weaknesses, but what are the differences between DC and Marvel characters? DC characters tend to concentrate on their own lives and purpose, while Marvel heroes deal with differing situations at every turn. DC superheroes tend to be proud of their abilities; they have acquired them because they wanted them in most cases (perhaps Superman being an example of the opposite); they are also strong in their ideologies. Marvel characters however, seemingly see their powers as more of a burden and a constraint on leading their own lives (away from being superheroes).

DC Comics have endured many changing periods because the characters are a constant. Yet the characters often have emotional or psychological problems to deal with; Batman has angst over the death of his parents, Superman is hurt by the problems of a dual identity, and Wonder Woman is torn between her love of the Amazons and her feelings for the men in her life. DC heroes also have a tendency to develop into larger teams, becoming a family unit such as the JLA (Justice League of America) and the Teen Titans. They are predictable, but loveable, both in their own worlds and by the comic book readers.

Marvel characters tend to be more erratic, but this could be because the motivations and back stories have altered many times. However the general mood and concept of the hero remains. Marvel characters are all too often threatened by outside influences. While they have internal personal struggles, it is also society that attacks them. The Fantastic Four fight against people's fear of them, Spider-Man is openly rejected (albeit by a biased media) for his vigilantism, as is the Punisher, and the X-Men battle xenophobia. It is both a struggle for them to accept themselves and for society to accept them3.

How do Superheroes Become 'Super'?

For the most part, DC and Marvel follow two different philosophies: DC characters tend to have acquired their powers by supernatural, magical or alien means4, while Marvel characters however seem to have developed powers from scientific accidents or means, whether by exposure to radiation or by genetic mutation5. There are exceptions to this general rule, with DC's Flash (a lab experiment gone wrong) and Marvel's Dr Strange (magical powers passed on), but the fantastical elements are still strong in both.

Where do the Characters Come From?

Both DC and Marvel characters are created from original ideas as well as elements lifted from older, more mythological tales. However, the DC Universe seems to be one that is wholly fictional, with cities and worlds that have no place in reality (Star City, Metropolis, Gotham City and the Dreaming). Marvel heroes tend to come from the guy or girl next door theory - they live in real places, be it New York, Los Angeles or Toronto. This in turn lends DC characters a more surreal edge, able to do and be things unheard of, while the Marvel characters have to live within certain human restraints.

Both companies are hugely popular, often among the same people (comics readers tend to like variety), but their successes have been varied. Both have seen Hollywood excitement over characters - DC in the 1980s and '90s (Superman and Batman enjoying great success), Marvel having a glut of renewed interest in the early 21st Century (X-Men, Spider-Man, Hulk, Daredevil, The Punisher). With the development of other publishers though, most notably Dark Horse Comics and IDW Publishing, the two titans risk becoming just mere gods among the comics world.

Despite their many differences, both DC and Marvel have entertained us for decades and will continue to do so for years to come, even if they undergo significant change (like the very heroes they have created). Whichever you prefer, you have to admit that greatness runs throughout every page created by these two comic industry giants.

1It was in Detective Comics that the legendary Batman, the dark knight detective, made his first appearance.2Never afraid to tackle issues, Marvel also included storylines on homosexuality and AIDS during the '80s-'90s.3DC have explored these themes with Batman however, the dark knight being a character feared by both criminals and the every day person.4In a time when the B-Movie and interest in the 'space race' were at their height.5During a period in history that became known as the Atomic Age, with the advent of nuclear power and higher publicity of scientific experimentation.