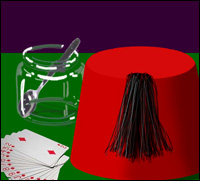 Two cannibals eating a clown
One says to the other, 'Does this taste funny to you?'

Tommy Cooper was born in Caerphilly, Wales on 9 March, 1922. When he was three years old, his parents moved to Exeter in the south-west of England, where he spent the rest of his childhood and acquired the west-country accent that was an important part of his comedy persona.

After school, he initially became an apprentice shipwright but, with the outbreak of World War II, Tommy joined the army. It was while performing in a NAAFI1 entertainment show in Cairo, Egypt, so the story goes, that Tommy added the most recognisable trademark to his routine. During a sketch in which he was supposed to be in costume, he realised that he had forgotten his pith helmet. Rather than nipping off stage to fetch it, or carrying on without it, Tommy reached out and grabbed a fez from a passing waiter. This got a huge laugh from the audience, and Tommy stuck with the fez from then on.

...go up and down, don't they? The one I was in went back and forwards. I thought, 'This is unusual.'
And the dentist said to me, 'Mr Cooper, get out of the filing cabinet.'

On being demobbed from the army, Tommy worked in variety theatres around the country, particularly the Windmill Theatre in London, where for a time he performed 52 shows per week. It was while committed to this gruelling schedule that he honed his act, with its combination of groan-worthy, but brilliantly-delivered, one-liners and bungled magic tricks. He also came up with his much-imitated catchphrase - 'Just like that' - accompanied by a shake of the hands as if desperately trying to cast a magic spell.

Stories vary as to how Tommy hit upon the idea of his 'failed magician' persona, but in reality he was a skilled magician and member of the Magic Circle2. Some accounts suggest that, as a young man, he was performing to some of his shipbuilding colleagues when everything went wrong. Tommy was devastated, but still noted that the failed tricks got laughs. An alternative version of the story is that Tommy went to an audition at which all his tricks went wrong, but which the panel thoroughly enjoyed. Another alternative suggests that the disaster happened during his army days. Whatever the true story, Tommy converted magical failure into comic genius, working as hard on his disasters as other magicians worked on real magic. And, to keep the audience on their toes, Tommy wasn't averse to throwing in the occasional trick that worked, just when it was least expected.

Tommy's act was not limited to his magic routines. He also appeared in sketches, and perfected routines in which he would proceed to tell a story, taking the roles of two or more characters. Sometimes he would dress so that half of his body was one character (often female) while the other half was a second character. For other routines he would have a large collection of hats, moustaches, wigs and assorted paraphernalia that he would swap rapidly as he changed character. Of course, these routines would end in hilarious farce as he mixed up his characters, voices and props.

Tommy's first attempts to get into television were far from successful. After a BBC audition he was referred to as 'an unattractive young man with indistinct speaking voice and extremely unfortunate appearance'. He eventually made his first television appearance in the 1947 edition of The Leslie Henson Christmas Show.

Success in television didn't happen overnight, and Tommy returned to theatre performances for a few years. In 1952 he appeared at the London Palladium and started appearing in one-off television specials, before being given his own television series - Cooper (1957) - on the ITV network.

I Had A Dream Last Night...

...I was eating a ten-pound marshmallow. I woke up this morning and the pillow was gone.

Even before Cooper had finished its 12-episode run, Tommy was offered a second series, Cooper's Capers (1958), and throughout the 1960s and 1970s he was rarely off the screen. He also ventured briefly into films, his most notable role being that of 'Larger Workman' in the classic short comedy The Plank.

By the early 1980s, alternative comedy was on the rise and Tommy's brand of music-hall variety was becoming unfashionable. His last appearance was in 1984, when he was asked by fellow comedian Jimmy Tarbuck to make a guest appearance at Her Majesty's Theatre in London. During the act, Tommy collapsed on stage. The audience, used to such shenanigans, assumed it was part of the act. In reality, Tommy had just had a massive and fatal heart attack3. Tommy died on 15 April, 1984 at the age of 62.

I Was Cleaning Out the Attic...

...the other day with the wife. Filthy, dirty and covered with cobwebs... but she's good with the kids.

Little is widely known about Tommy's private life. He and his wife Gwen had two children and were married until the end of his life. However, Tommy drank heavily and reportedly had several affairs. He was also a workaholic, which undoubtedly contributed to his early death.

In recent years, a play by John Fisher about the life of Tommy Cooper - Cooper! - has toured the UK. The play has generally been well-received, particularly by Tommy's fans. The main criticism, however, is that it concentrates too heavily on his stage act, with little detail about his life away from performing.

Tommy Cooper was one of a generation of British comedians who were not only admired as performers, but were held in genuine affection by their audiences. So, for as long as the fez exists as an item of headwear, someone, somewhere, will be putting one on, holding their hands out as if doing a magic trick, and mumbling, 'Just like that'.

1Navy, Army and Air Force Institutes.2A worldwide organisation of magicans and illusionists. Would-be members, who must be recommended by existing members, must pass an examination within one year of joining to receive full membership.3In the same year, exactly the same thing happened to another well-loved British comedian of the same generation: Eric Morecambe.