The Gold Death Mask of Tutankhamun - the Boy Pharaoh Content from the guide to life, the universe and everything 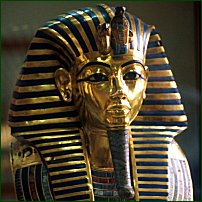 The Pharaoh, who in life was one of the least-esteemed of Egypt's kings, has become in death the most renowned.
- Howard Carter, author of The Discovery of the Tomb of Tutankhamun.

Pharaoh Tutankhamun was buried at Thebes in the Valley of the Kings in 1323 BC with a vast treasure which lay undiscovered until 1922. The find by archaeologist Howard Carter created a worldwide sensation, fuelling the imagination of the public and raising interest in ancient Egypt and its culture to an unprecedented level throughout the world. This was the first time an ancient Egyptian Pharaoh's tomb had been discovered intact. Who can guess how many people have since been inspired to become archaeologists, or just took up an interest in Egyptology thanks to the discovery of the funerary goods and priceless artefacts of a long-dead teenaged monarch? The reason this tomb was missed by grave-robbers is that its location was never recorded; and later, a much larger tomb was built almost on top of it.

The burial chamber lay exactly as it was on the day the priests had tied the knots on the shrine enclosing the sarcophagus. Alongside the Pharaoh's burial chamber was another room containing all he would need for the afterlife: his chariot and all his personal belongings were entombed with him, in accordance with his people's beliefs. What must have been an incomparable wealth of gold and other treasures were sealed in the tomb. Also found in the tomb were imitation servants and food which the ancient Egyptians believed would become real in the afterlife.

The Pharaoh's sarcophagus was not opened immediately; the outermost container almost filled the entire burial chamber, and had a solid lid which was too heavy to lift manually. Once specialist equipment had been obtained, the intricate work tentatively began. Slowly but surely, the top was raised. The work was painstaking, as one slip would have brought disaster. Four more outer coffins were opened, then a pharaoh-shaped gold-covered wooden coffin was revealed. Finally the last coffin was uncovered: it was also shaped like a pharaoh, but did not resemble Tutankhamun. Inside this solid gold coffin was the mummified body of Pharaoh Tutankhamun.

Discovery of the Gold Mask

Covering the head and shoulders of the Boy King was an awesome spectacle, a solid gold death mask. It was to become the most famous example of Egyptian craftsmanship ever seen by the modern world. The face was an idealised portrait of the hitherto-unknown boy king, beneath the nemes head-dress1 of striped gold interspersed with lapis lazuli2. Lapis lazuli is sometimes referred to as 'blue gold' due to the costly and time-consuming method of extracting the ultramarine pigment from the rock.

The Pharaoh's chin bears the false beard of the gods; and a broad, intricately-decorated collar (known as a pectoral), inlaid with semi-precious stones, covers the shoulders and upper chest region. On his forehead are the animal representations of the gods who protect the Pharaoh: the vulture, symbol of Upper Egypt and earthly embodiment of the goddess Nekhbet; and the cobra (uraeus - this is also a hieroglyph) who spits at the Pharaoh's enemies, while also representing Lower Egypt, guardian of the gates of the underworld, and guide to the deceased Pharaoh on his journey through the underworld.

Finally gazing upon a treasure beyond measure, Carter and his men crudely wrenched the golden mask away from the royal mummy. It had been glued in place with resin, and the act of separation severed the Pharaoh's head from his torso. The same disrespect was shown to the rest of the Pharaoh's remains. During the process of Tutankhamun's mummification, personal jewellery was placed between layers of linen wrappings, with each subsequent layer being bonded to the previous one with resin. Also enclosed within the wrappings were 143 amulets and charms, specifically meant to ward off evil spirits. Such was the haste to get at the treasures that the mortal remains of Pharaoh Tutankhamun were torn apart.

A Decade of Paperwork

It took Carter ten years to catalogue everything inside the tomb, including the mummified remains of two stillborn children, and he faced bureaucratic red tape and considerable delays during this time. At one point he was banned from further work and the tomb was resealed. Amid accusations of plundering the tomb himself, the obsessed Carter persevered until the job was done. His name has become synonymous with Tutankhamun's; the location and discovery of the intact royal tomb was an archaeological dream come true, and the beautiful treasures became available for future generations to behold.

The magnificent artefacts of Tutankhamun's tomb, including the priceless death mask, have travelled the world. There was a 50th-anniversary-of-the-discovery exhibition in 1972. The 'Treasures of Tutankhamun' tour was viewed by more than eight million people in the USA alone. Over 1.7 million people - triple the number for any other gallery exhibition held in Britain before or since - visited the British Museum to view the golden mask, and the Royal Mail issued a special 'first day cover' envelope as well as a range of postage stamps. Other galleries displayed the treasures before their return to Egypt.

Since the early 1980s there has been a law in Egypt preventing any Tutankhamun artefacts from leaving the country. However, the Cairo Museum, which houses the fantastic treasures Egypt possesses, is wholly inadequate for the constant stream of visitors who wish to gaze upon the fabulous icon of a bygone age. Compromise had to be reached to raise funds for a new modern home for Egypt's heritage, as tourism is an important industry for the country. People travel from every part of the world to view the most famous archaeological find in history.

In 2005, a new American tour of Tutankhamun's treasures, this time called 'Tutankhamun and the Golden Age of the Pharaohs' began. The tickets were time-restricted, (only good for half-an-hour), so at busy times it was not possible to see everything. One consolation is that the price of the tickets included a $10 US donation direct to the Egyptian Supreme Council of Antiquities to raise funds for the new museum. Expected to attract more than three million people, the exhibition started in Los Angeles, California, then moved to Fort Lauderdale, Florida. The tour moved on to Chicago, Philadelphia, and Pennsylvania throughout the rest of 2007, finally crossing the Atlantic to descend upon London, UK, in late November 2007. The entourage will return to its Egyptian home after the exhibition closes on 30 August, 2008.

It is estimated that only 40% of the items on show are from the Tutankhamun tomb. Photography of any kind is banned, no doubt to protect the artefacts, but this has the added benefit of boosting sales of souvenir books, catalogues and postcards. However, people really should be warned that the exhibition does not include the famous death mask. There have been complaints about misleading advertising. What you will be able to see is the 'Canopic Coffinette of Tutankamun' - a Canopic jar which once held Tutankhamun's liver. The jar, fashioned in Tutankhamun's image, is 16" tall, but close-up photographs of it in the advertising have been misleading attendees into believing they are going to see the larger, more famous, death mask. Caveat emptor3.

As we gaze in awe upon the staggeringly beautiful death mask of Pharaoh Tutankhamun in its protective casing in the Egyptian Museum in Cairo, we struggle to comprehend the ancient civilisation which could produce such an astonishing, majestic homage to their deceased ruler, and wonder at their incredible artistic ability with such limited technology at their disposal. Pharaoh Tutankhamun's death mask has come to represent the long-dead culture of ancient Egypt and the people who gave the world hieroglyphics. What a shame Jean-François Champollion, the man who decoded hieroglyphs from the Rosetta Stone, lived a century before the mask's discovery; he died never even knowing of its existence.

1A piece of cloth pulled tight across the forehead and tied at the back, with two flaps hanging from the sides.2The name lapis means stone and lazuli is Persian for blue.3Let the buyer beware.